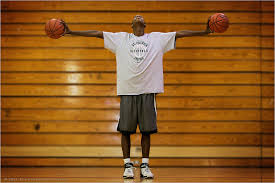 On Friday, Tyler “Tyty” Thompson posted an article from coachcal.com that profiled Michael Kidd-Gilchrist and his struggles in life, and in particular, why Calipari loves him so much.  It gave a lot of insight into things people may not have known about him, and it had to endear him more to the UK fanbase.  Well, clearly one article was not enough to put all the good stuff in there, so coachcal.com put another one up yesterday with some other tidbits.  The highlights:

“They’ve been great. We have a good bond from them. Everyone has demonstrated a lot of leadership and hard work. I can’t pick one person that has stood out to me because everyone has done well. I think I’m doing well for the most part. The games are a lot faster and stronger than my high school games.”

Remember how Brandon Knight was a big Shakespeare fan. Gilchrist might be taking that baton from him:

â—¦Michael doesn’t know what he’s going to major in yet, but he said he likes reading poetry and is going to see where that takes him.

And on who he tries to model his game after and role models:

â—¦Growing up, Michael looked up to and tried to model his game after former Memphis stars Chris Douglas-Roberts and Dajuan Wagner. Wagner played one season under Calipari at Memphis before a brief stint in the NBA. He’s also from the same area as Michael.

8 Comments for One article was not enough, so Michael Kidd-Gilchrist gets another