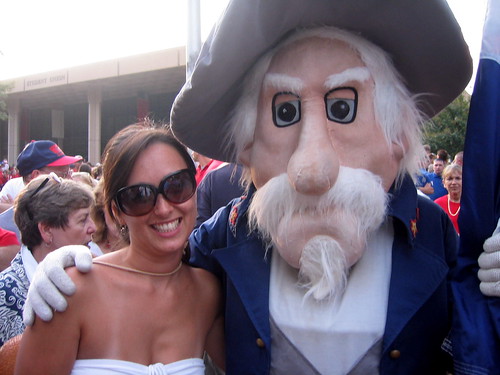 Tonight is the game that always seems to come at a strange time on the schedule, the yearly battle of bizarre with Ole Miss. Over the years, the Ole Miss games have always produced strange moments, whether it was an outpouring of points by Gerald “World Class” Glass, the battle of Tubby vs Brian Smith, the absurdly dark arenas in Oxford or last year’s now infamous Jeanine “thats a bad question” Edwards moment that started the Billy Clyde boulder down the mountain of desperation. Yes when you play Ole Miss, you have to focus on more than its Plantation Owner mascot (which apparently has now been banned…and not one century too soon!). You also have to focus on the possibility of something strange happening and making you scratch your head.

This Ole Miss team is like the last couple of teams from Oxford in the sense that they have good guards who like to fire from long range and can get hot in an instant. Also like those other teams however, if the shots arent falling, the losses are coming. The Rebels generally play a three guard lineup, that works an offense built around the outside shot. They also have been hitting the glass this year, but injuries in their front line have made it more difficult to have a presence down low…showcased by their recent loss at home to Arkansas. They come to Rupp on 48 hours rest from that home loss and in only their second nationally televised game of the year.

This is a HUGE game for the Rebels. A win and they would be on the path to locking down an NCAA berth. A loss, and things start getting much more difficult. The key for Kentucky is quite simple…stop the three point shot and you win. We know Calipari knows that and I would expect extended defense, very similar to what was employed on Rotnei Clarke last week.

We will have a LIVE BLOG for the game beginning at 6:30 right here on the site. Dont miss it, live from Rupp Arena.