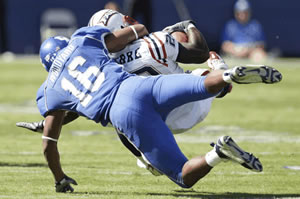 Measureables: Woodyard measured in officially at 6’1/2”, 227 pounds and, as expected, performed well in the drills that measure speed and athleticism. Woodyard ran a 4.57 in the 40 at the NFL Combine, which was second fastest among the linebackers and was also second in the 60 yard shuttle with a time of 11.46. In the 20 yard shuttle, Woodyard ran a 4.25, good for a fifth place tie and had a broad jump of 9‘10“, which tied for seventh out of the linebackers.

Scouts Take: NFL teams are in love with his speed, obviously, and love his physicality – especially for someone who is a bit undersized. They also credit him for his ability to read plays on defense and his leadership abilities. Also, his ability to drop back in coverage and play the pass has earned him strong reviews. NFL scouts describe him as a “true football player”, regardless of position. But, therein lies the problem.

Woodyard is undersized and, despite his speed, lacks lateral quickness that NFL teams like to see in their linebackers. Some scouts describe him as “stiff” and worry that this might negate the advantage that his speed gives him, placing a big red flag on a possible conversion to safety. Also, even with his success as a playmaker and tackler in college, some feel that Woodyard’s poor tackling form will catch up with him at the next level.

Teams: Despite the knocks on Woodyard for being small and playing stiff, the scouts don’t argue that he is a productive football player and that there is a place in the NFL for a guy who led the SEC in tackles for two straight years – regardless of his size. Now, with that being said, if Woodyard is drafted to play linebacker rather than as a special teams player or a safety project, he will most likely land with a team that plays the Cover 2.

The player he is most compared to, Cato June, has found success since converting from a college safety with both the Colts and the Bucanneers, and Woodyard could land in either of those two places. He could also be picked up by a team like the Rams, Bears or Jets who also play a type of Cover 2 defense. If a team decides to snatch him up as a safety or a special teams player, then it’s anyone’s guess.

I know one thing though.  I’m not going to question Woodyard’s heart or count him out of anything.  I’d bet the bank on him making some sort a career in the NFL.

Projection: Woodyard is expected to go in the sixth round.