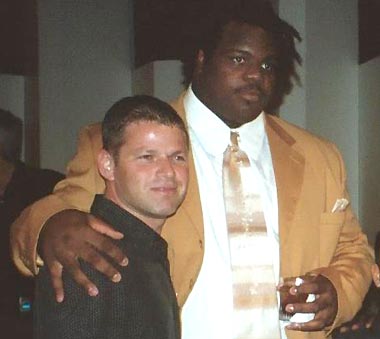 Remember that Nevin Shapiro guy who decided to spill the beans to Yahoo’s Charles Robinson on all the Miami illegal recruiting tactics he had been a part of as a booster after he got busted for a ponzi scheme?

Well, in case you missed it, his right hand man spoke up this week in a detailed interview with Yahoo’s Bruce Feldman. This hefty read is worth your time if you want to see how strange (and often misunderstood) the life of a ‘middle-man’ is in college football. Check out Nevin Shapiro’s former employee Sean Allen’s tale of the Miami Hurricane football underbelly, including a Teddy Bridgewater mention. Check out this excerpt:

Two months ago, Yahoo reported that after reviewing Allen’s phone records and testimony, he had contact with at least 10 Miami-area prospects that were being recruited by Golden’s staff.

Allen testified that on Dec. 17, 2010, less than a week after Golden was hired as UM’s coach, he attended a dinner at Dan Marino’s restaurant. Allen had been asked by a Miami staffer to bring Teddy Bridgewater — then a blue-chip high school recruit who had been previously committed to Miami — to the restaurant, where Golden was eating.

Someone at the table suggested Bridgewater, who was there on an unofficial visit, should order some food, but Allen says, “Golden then turned to me and said, ‘That’s probably not a good idea. Just feed him on your way home.’

“Without a doubt, one million percent, I remember that conversation happening.”

Interesting stuff from the scandal that made us aware of Clint (butt)Hurtt’s shady side. I hope Sean took Teddy to Taco Bell on the way home. Drew Franklin would be proud.