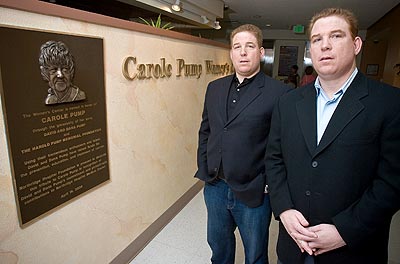 The NCAA took a stand against recruiting grey area (as well as euphemisms) today when, according to the NABC, they issued a decree telling coaches to no longer associate with a charity run by David and Dana Pump, which may or may not be a way of channeling money to contact recruits. The Pumps, who sponsor AAU team “Pump-N-Run” and also run a business called “Double Pump Inc.” first gained notoriety when their creepy co-photos were posted all over the internet following the Kansas scandal. The NCAA noted that the rule was not intended only for the Pumps but that “based on appearance and their strange fixation on vulgar innunendos, we’re pretty sure they’re the most likely to be doing seedy things”.