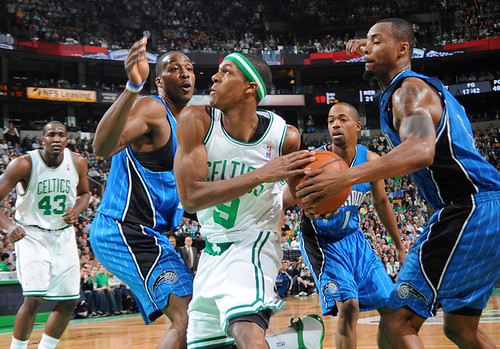 The guys over at the Bleacher Report take hold of the rumors swirling around New Orleans Hornets (the most ridiculous name in sports this side of the Utah Jazz) point guard Chris Paul. For those that are unaware, Paul is a bit unhappy in New Orleans and would like to be traded to a contender. There were indications this week that any team that might acquire Paul would then vault into the lead of the LeBron James sweepstakes. Apparently, King James would look hard at any team that has Chris Paul as a member. TBR looks at 10 players that could potentially be traded for Paul in a realistic scenario. Of course, Kentucky’s own Rajon Rondo is one of the targets. Says Bleach:

It would be great from the Hornets’ point of view, since they would be swapping elite point guards while saving money. The question would be if the Celtics would accept the trade.

Considering the C’s just made the NBA Finals with Rondo at the helm, I would say that’s doubtful at best.

I’m not sure I agree. There have been some problems between Rondo and his teammates this year and there is a general consensus that Paul is either the #1 or #2 PG in the NBA. Of all the players that could be traded for Paul, Rondo actually makes the most sense for both teams. NO gets their unhappy PG to a team that is a contender and receives a PG that is a top 10 PG, an NBA champion, and hasn’t reached his full potential. It also gives the Celtics the inside track on LeBron. With the potential departures of Ray Allen (free agent), Rasheed Wallace (retirement), and Mr. Candace Parker, this would be a strong move for Boston.

TBR goes on to include a trade of Paul for Tayshaun Prince. I think we can all agree that, no matter how much we all love Prince, there is no way you trade Paul for him. That just isn’t going to happen, but it would be cool if Tayshaun was traded to the Hornets and Detroit received Paul and then lucked into Boogie in the draft. Would there be a better situation for our beloved center? I also don’t trust any NBA GM to make a smart move so maybe this Paul for Prince trade could actually happen.

So, I put it to you, gentle KSR reader: Who ya got? Paul for Rondo? Or would you rather see Motor City rock the Cousins/Paul combo? Or do you have any other bright ideas? Let’s hear it in the comments.