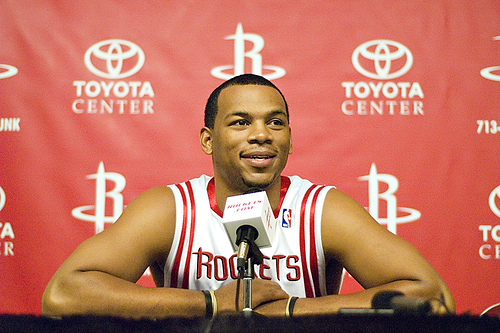 With the June 24th NBA Draft steadily approaching and the NBA playoffs drawing out like a blade, there are a variety of items out about Wildcats and the Association. Let’s take a look:

1) So it looks like some people are surprised by the height and weight measurement discrepancies between college and NBA. Some people have already covered that angle. It is also nice to see some athletes not named DeMarcus getting some “dunno about the attitude” flack.

2) I touched on this earlier, but there is a steady drumbeat out of Indianapolis for the Pacers to take a serious look at Eric Bledsoe with their #10 pick. Mike Wells of Indystar.com thinks the Pacers made a mistake last year not drafting a PG and should take Bledsoe if he is available this year (He also takes a shot at Pet Detective Tyler Hansbrough. For my money, you can never get enough of that). Dimemag makes the case for Bledsoe because the point is the position in which Indiana needs the most help. It sort of seems like a stretch, but if they need a PG, I’d much rather have Bledsoe than Gordon Hayward.

3) If you missed it, the Houston Rockets picked up the option on Chuck Hayes’ contract. That is kinda good in that it means the Rockets recognize what a special player Chuck is and want to keep him. It is kinda bad because the thinking was they would let his current contract expire then negotiate a long term deal with the Chuck-wagon. Key free agent Rockets at the end of their contracts is being blamed for the change in direction. This piece from Rocketdunks.com reiterates what everyone in Kentucky already knew: Chuck Hayes is awesome.

4) Regarding the draft in particular, a record number of entrants have thrown their name in the hat. 74 players have declared for this year’s draft compared to 49 players last year (where 17 went undrafted). While that doesn’t affect the UK entrants, it does indicate that the level of talent next year in college basketball will be less experienced and less talented.

5) Michael Abramowitz makes the case for LeBron James joining the Washington Wizards (He has a good line about LBJ, too). As skeptical as I am about John Wall joining Gilbert Arenas in the district, adding King James to the mix would be an exciting move.

6) Would you like to read about an NBA coaching opportunity that is not considering luring away John Calipari? I present to you: The LA Clippers. That franchise is just terrible. They can’t even daydream about the future appropriately.

7) Rajon Rondo will be ready to go for the Finals despite the low down shenanigans of ex-Florida player Jason Williams.