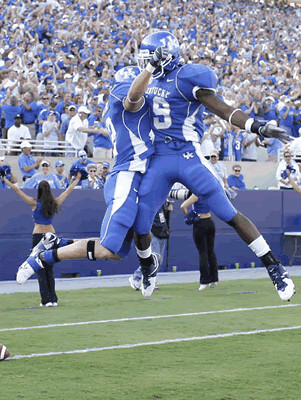 Still not a lot going on with the football Cats, but there are a few happenings – mostly on the recruiting trail.  With only about a month until fall practice officially starts and two months until the first game, it’s time to start getting your mind right for UK’s third straight bowl game.  Here’s what is going on:

– Matt mentioned over the weekend (or maybe it was me) that the Cats picked up yet another football commitment late last week, bringing their total for the class of 2009 so far to 10. Justin Jones, a 6’8″, 240 pound TE from Conyers, Ga. gave his verbal on Friday after taking a less-than-stellar visit to South Carolina. The entire Gamecock coaching staff was out of town on vacation when Jones made his visit and he was given his tour by a grad assistant. That didn’t sit well with Mr. Jones and his family and he committed to UK the next day. The three-star player was no stranger to UK though, having attended camp in Lexington last month and taking in the UK-Florida basketball game on a visit in March. He runs a 4.8 40 and was also offered by Akron, East Carolina and UAB.

– The Cats lost two offensive linemen in Phillip Hibbard and Josh Winchell. Winchell, a senior who transferred to UK from NW Mississippi Community College prior to last season, was forced to give up football due to recurring knee injuries. Hibbard, a 6’7″ 300 pound redshirt freshman from South Laurel, left the team according to a spokesman. He could return at a later date, but will not be on scholarship this season.

– Stud QB Morgan Newton (5-star on Scout.com) from Carmel, Ind. still lists UK as one of his favorites along with South Carolina, Clemson, Florida, Illinois, Indiana, Purdue and Miami and is planning to visit both Florida and Miami in July. Newton has already visited UK twice and said that he is attracted to the pro-style offense, Joker Phillips, the quarterback lineage and playing in the SEC.  The troubling news for the Cats is that Newton doesn’t plan on narrowing his list anytime soon and said last week that he’s even willing to listen to other teams that he hasn’t considered and lengthen his list some.

– Five-star wide receiver Marlon Brown from Memphis has Kentucky listed as one of the 19 schools that he’s considering and he plans to trim the list over the summer, but has yet to do so. He is, however, having an impressive showing on the summer camp circuit. Rivals named him as the best athlete at the wide receiver position in their rankings and he dazzled at USC’s summer camp last week. Brown, along with Alshon Jeffrey, were by far the best wideouts at the camp and Brown impressed coaches with his physique and ability to outmuscle defenders.

– Andre Woodson officially signed with the Giants. It was a four-year contract, but the financial terms were not released.

– According to 67% approved Chip Crosby, Kentucky is targeting Indiana OT Zach Martin, the son of former UK player and Joker Phillips teammate Keith Martin. The younger Martin is 6’5″, 270 pounds and rated by Rivals as the 18th best tackle and a 4-star recruit. He has been offered by Kentucky and also holds offers from ten other schools including Illinois, Michigan, Notre Dame and UCLA.

– 62 days until the game against the Filthy Cards – a program that has seen 21 players leave or be dismissed since last spring.