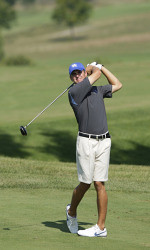 Jordan in his UK days.

-What is a good way to start off a Monday? How about a scathing beat-down of the dude pacing the sidelines over in the ‘ville? Would that do it for you? If so, check out this article from Todd Jacobs at the Bleacher Report that settles Pitino’s hash while praising UNLV’s Lon Kruger. How did I miss that the reason Pitino didn’t jump ship was a perceived slight against his wife?

-Sticking with TBR, Collin O’Connor makes a list of 5 college basketball players that have something to prove next season. Included are Lexingtonian Shelvin Mack and Kentucky’s Brandon Knight. Not included is Enes Kanter, but I think he definitely has to prove whether or not he can pull off a Gogoplata/Tombstone combo against an opponent like The Miz in a casket match.

-Lost in all the golf hoopla over the weekend was a recent UK graduate making some noise in some pro tournaments. Jordan Blann won the 2010 Pepsi-SuperValu Irvin Golf Championship on Sunday in Paducah. Blann’s final score was 11 under par for the tournament and it is the second pro tourney he has won since leaving UK. Congrats to Jordan and we hope so see you up with JB Holmes soon.

-And finally, have some video of new Sixers coach Doug Collins talk about our own Jodie Meeks. Collins likes Meeks’ shooting ability (duh) and his ability to take care of the ball.