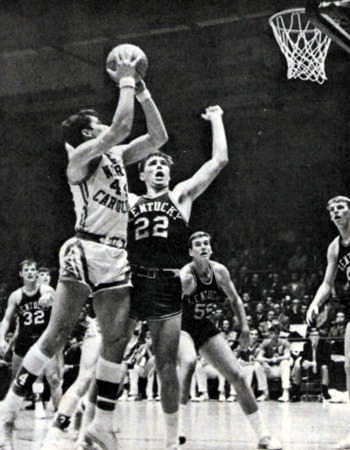 Its no secret to anyone that knows me that I am a huge fan of Mike Pratt. On both a professional and a personal level, there isnt anyone that I have been around over the last couple of years who has been nicer to me than Mike. During that time, I have gotten to know a lot about Mike and his feelings and love for UK basketball. So while these quotes below didnt surprise me, as he had said similar comments to me before, they were interesting to read. Larry Vaught asked Mike what he thought of Gillispie and he said,

“I made up my mind that if Billy Clyde was back, I was done,” Pratt said. “I told my wife. I told (former UK teammate) Mike Casey that before Casey made some of his comments (about Gillispie).

The feelings Mike expressed are not unique to him. The mood around everyone in the program was akin to torture and Pratt would have been one of likely many changed had Clyde returned. Talking to Mike over the last couple of years, I know that his love of the program runs as deep as anyone. He was a key ingredient to bringing Calipari here and there may be no basketball alumnus who has done more behind the scenes to enrich UK basketball than Pratt. As I talked to him last year, you could tell how bothered he was by all that was going on and he now has let that sentiment out publically.

Every time I read the few fans who wonder about the decision to get rid of Gillispie, I think of guys like Mike and the players that are returning. Their newfound happiness and energy showcases what a positive decision was made and just how far out of the abyss, the Kentucky program is about to rise.