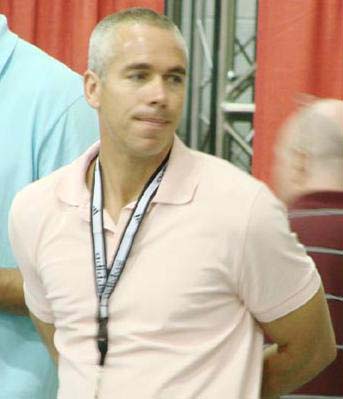 What is 5′ 10″, wears pink shirts, graduated from Yale Law School and looks like Anderson Cooper? If you said John Wall’s new agent Dan Fegan, you are CORRECT! Wall picked Fegan out of a batch of every agent that could possibly exist, choosing the owner of BEST Agency as the person who will represent him in negotiations during his NBA career. The early on favorite was thought to be those around Lebron/World Wide Wes, but that just showed that those who guess on such things are usually simple-minded souls who write newspaper articles and website posts. Instead Wall went with Fegan, who has previously been known for his international clients in all forms of basketball and who is rumored to be considering a merger with an international agency that could produce world power like we have never seen before.

Now I always wonder when people sign with agents, who else does Fagan represent? A quick look at the BEST website suggests that Wall will have some company at the Fagan Christmas party every year:

But there is more…it is not just basketball players who are with Fegan…we have others as well:

Floyd Mayweather Jr — The only boxer worth representing

Tom Crean — May need to use these skills if he doesnt step up
Seth Greenberg
Andy Kennedy — Only Dustin Rumbaugh has worse cab rides
Reggie Theus — Got him that big “Hangtime” contract
Herb Sendek
John Pelphrey — Paintsville representing!
Happy Osborne — Tough to negotiate with terrorists or Georgetown College

As you can see, it is quite a group. You may have not thought Wall, Calathes, John Saunders, Happy Osborne and Austin Croshere had a lot to talk about, but you were wrong. Wall only hangs with the best, and now he is with BEST, ready to make that crazy salary that is to come his way. And as for those who work for BEST, we here at KSR are currently unrepresented and would be glad for you to take over all of our deals, except that of Bryan the Intern of course. He is working for college credit.