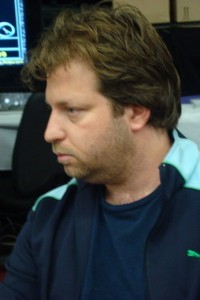 Coming off a weekend where a pair of sometimes overlooked sports – golf and soccer – took the biggest stage, it’s a man playing one of the world’s great fake sports (second only to NASCAR) that earns our recognition this morning.  Matt Salsberg is currently 70th in the standings at the World Series of Poker, which essentially matters little to any of us.  But there’s more to Matt Salsberg’s bio than just poker.  He’s a writer on the show Weeds and is a former producer of Entourage.  And that’s where it gets interesting.  Why is he a former producer and not a current producer?  Well, he took a dump in the creator’s personal bathroom and was fired.  And that’s pretty much it.  This guy is getting his picture on the site because he got fired over poop.

– A few weeks ago, when we were just starting to get desperate for things to write about 10-15 times per day, we started looking at some best case/worst case scenarios for individual players in 2011-12.  The first group we looked at was the freshmen and, hold your excitement, here comes a glance at the returning rotation players.  Yes, that means we’ve got a Hood/Poole/Polson/Vargas/Beckham grouping coming soon.  We’re saving it for Sweeps Week, of course.  Anyway, without further ado, here we go:

Best Case:  Consistency.  It’s been the elusive goal for Darius Miller’s first three seasons as a Cat and his final year in Lexington gives him another chance to finally add it to his repertoire.  On the court, continuing to be a threat offensively both on the block and on the perimeter, as well as an improved defensive presence would be a great success.  If Miller can do those things, while serving as a point forward for a handful of possessions, he might just position himself to be the sixth Cat off the board in the NBA Draft.

Worst Case:  Well, pretty much the opposite.  Inconsistency.  There’s a chance that Darius Miller won’t start next season, though I still think that’s a longshot, and even if that’s not the case, he’s going to be rotating between wing spots with Michael Gilchrist and Doron Lamb.  Miller finally looked comfortable late last season with himself and confident in his role after being ruined by Gillispie.  If he starts fighting mental battles over missed shots or shared minutes, it’s going to be tough to get him back on track again.

Best Case:  Jones does what Calipari wants and finds a way to make the same jump that Derrick Williams did as a sophomore.  If Jones can find a way to get himself playing like he did early in the season, when he looked to be just playing instead of thinking, his production will be at an All-American level.  He’ll probably be seeing fewer shots, but he can still improve his scoring by making more efficient use of them and getting to the free throw line.  Maybe he’ll use his right hand.  Doing these things while still scoring the ball while facing the basket can put him in the top-10 and maybe even the top-5 of the NBA Draft.

Worst Case:  As seemed to be the case last season, Jones starts over-thinking plays and struggles to be productive while the other players on the court play efficient basketball.  Though Anthony Davis isn’t a prototypical center, he’ll be able to use his length to post up and score inside, giving Jones the opportunity to attack the basket off the dribble.  However, he can’t get caught up in just camping out at the three-point line or burying his head and driving at the basket and heaving it.

Best Case:  The development as a big-time scorer continues, either off the bench or as a starter.  He plays some spot minutes as the backup point guard and finally learns how to play defense.  Then, of course, leaves for the NBA Draft.

Worst Case:  The defensive struggles continue and he becomes the team’s weak link, forcing Calipari to put him on the bench for crucial stretches of the game.  Lamb’s jump shot suddenly goes cold and he struggles to give Kentucky a deadly three-point bomber all season.  He still goes pro.

– What could end up being a much larger and far-reaching story over the next week broked Sunday when CBS reported that David Salinas, the founder of the Houston Elite AAU program, had committed suicide after the SEC started investigating a Ponzi scheme of his.  Salinas supposedly received millions of dollars in investments from a number of college coaches, including Billy Gillispie, Lute Olson and Scott Drew, which you’d have to assume makes a few eyebrows raise at the NCAA offices in Indy.  For Gillispie’s part, there appears to be no real connection to UK on the surface, though Houston Elite did send Joseph Jones to Texas A&M.  However, Gillispie was not named coach until several months later.  Ultimately, there could be no wrongdoing by any of the coaches and they might just be victims of their own stupidity, but I think we can all be certain that the NCAA is going to take a look at this little situation.  And then they’ll probably send UK a letter for not using the write font size on their banners or something.

– You know, we’re going to probably need to cool it with the LeBron hating thing.  I’m still amazed at the anti-LeBron push among UK fans and, as we saw again this weekend, King James is going to be tied to UK’s brand for the long run as long as it’s good for business.   The partnership was again on display this weekend when James sported UK shorts in a summer league game.  Guys like me and you probably don’t care.  Kids that want to go to the NBA or look up to James?  It means a lot.  So maybe we should ease off of all of that LeBron hate for now.  If Kentucky signs a deal to wear Christian Laettner Sperrys or Bruce Pearl G-strings, then we can unite in anger.  For now, though, let’s just enjoy the ride.

– Northern Ireland’s Darren Clarke won the British Open Sunday and the great Tom Leach pointed out an interesting tie between Clarke and John Calipari.  Clarke worked to get his mind right this week with sports psychologist Bob Rotella, who is a good friend of Cal’s and made frequent appearances to chat with his Memphis teams and stopped by to talk with his first Kentucky team in March 2010.  We’re reaching out to him right now so we can do something about BTI getting back on track.

That’s it for now.  Make sure you stick around for a big day Monday.  The fun gets going with Kentucky Sports Radio on Talk Radio 1080 at 10am.  Dave Baker is sitting in for Matt and will be joined by Oscar Combs, Jacob Tamme and Evan Daniels.  Make sure you check it out.  In the meantime….I don’t know.  Figure it out.