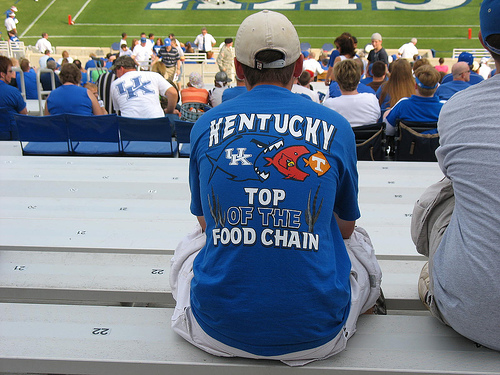 One of the more popular shirts on game day.

Hey, have you guys heard the news that the UK players’ GPA stats were terrible? Have you heard reporters chirp about our coach being a mercenary and UK becoming One And Done U? Cal is getting too many good players. . . wait. . .no, he just wiffed on two of the best players in the country and he is losing his mojo, obviously. Speaking of Cal Capone, did you hear that Calipari might go to the Nets? Or the Bulls? Did you know that Chicago might try to get Calipari to woo King James to the Bulls when the reigning MVP heads to free agency?

Ugh. Spare me. This time of year, there is so little to write about in sports that everyone seems to sharpen their claws on the teams that inspire the biggest reaction. Like it or not, our fanatical obsession with the Big Blue puts Kentucky squarely in the crosshairs. If we are doing poorly (like the last few seasons under Clyde), everybody piles on and exacerbates our failures. If we are doing well (like last season), every scribe that isn’t a fan tries to knock the shine off of Kentucky’s crown. They dramatize every aspect of the program in the hopes of generating a tornado of controversy that will help them weather the spring.

Well, I refuse to play. I know what is happening in Kentucky basketball and I’m ok with it. Like Nick Saban says, it is mouse manure. Instead, let’s focus on some of the more interesting and positive aspects of UK: LEXTRAN! Wait. I mean, FOOTBALL!

As Kate and Patrick and BTI’s Intern have all stated previously, there is a serious movement afoot by the Big Ten to add additional teams and set off a wild waterfall of circumstances that would cast the college athletic landscape into upheaval. Make no mistake, this is entirely about the money generated by the college football programs (the Big Ten isn’t looking to add Providence, for instance). Over at The Voice Tribune, Earl Cox has an interesting take. He wonders if UK would fight U of L’s entry into the SEC and if a governor might intervene on U of L’s behalf. Now. I dislike Louisville as much as the next Cat, but it never really entered my mind that Kentucky would actually fight the Cardinal’s entry to the point that it might demand political intervention.

So what say you, Cat fan? Would you support adding the dirty Cards to our illustrious conference and see how they fared against real football teams? Or would you rather slam the door in their face and let them lament their situation in some second rate football conference? Honestly, I’d be happy with either.