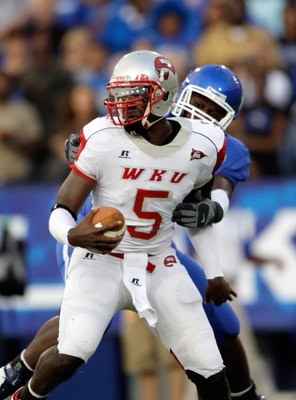 We’re less than a week away from Kentucky’s season opener against Western Kentucky in Nashville and there are still LOTS of seats available for the game. Todd Stewart, WKU’s senior associate athletic director, told the Bowling Green Daily News that he foresees a smaller crowd than what everyone had hoped for.

“Really, the only barometer we had to go by was when Louisville played Middle Tennessee in Nashville in 2006, and that game drew 32,797,” Stewart told the Bowling Green newspaper. “We were hoping to draw in that neighborhood. As of right now, it doesn’t look like we’ll reach that goal.”

UK announced today that lower tickets are still available through the university for a very affordable $43 a piece. Contact the UK Ticket Office at 1(800) 928-2287 if you’re interested.

Big Blue Nation usually fills Nashville for any UK event, but I guess a 9:15 PM kickoff on a Thursday night is tough for many people to pull off. Hopefully we can fill at least the lower half of LP Field to give the teams a loud reception in the season opener.

41 Comments for Lots of seats available in LP Field