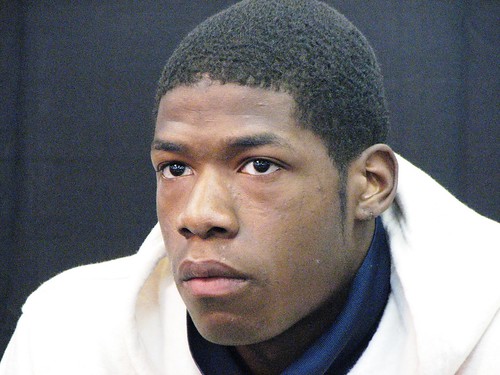 Brett Dawson flat gets it done. In a new article for the Courier-Journal, Brett profiles DeAndre Liggins. In it, he reveals the introverted personality of the UK Junior and his struggle to be more active and vocal with his teammates. He is participating in more team functions, actively pursuing relationships with his teammates, and becoming a better leader on the court. Another interesting aspect of DeAndre’s personality is his approach to working on his game:

Last season he learned lessons from Patrick Patterson’s approach in the weight room, he said, and from Wall’s dominance on the court. He studied DeMarcus Cousins’ intensity and tried to apply it to his own game. Now he’s studying freshman teammate Brandon Knight’s work ethic.
“I just try to steal things and watch guys, how they work and go about things,” he said.

Awesome. He is UK’s version of Highlander (although without all the beheading and swords and stuff), soaking up other players strengths and abilities like a sponge.

Like many UK fans, I wrote off Liggins as a selfish hot-head his freshman season. He seemed to have a certain arrogance on the court and his assumed ‘me first’ attitude was on display when he refused to enter a game for Billy Clyde. During the culling that occurred with Calipari’s arrival, I was a bit surprised that DeAndre made the cut. I was absolutely stunned last year when the guy I thought was a basketball version of Terrell Owens showcased an impressive defensive game and made some big shots on a team full of guys that made big shots. It is good to know how wrong I was and Dawson’s article is a great piece for any UK fan.