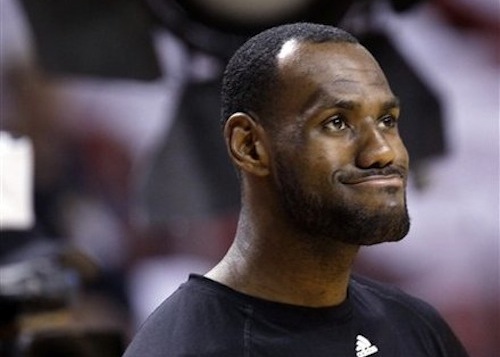 Matt is on vacation and Drew is apparently trying on Tyler Hansbrough jerseys, so that leaves you with me for the late night post tonight. Unlike Brian Long, I appreciate this opportunity.

LeBron James quieted some of his critics with a monster performance in a crucial Game 4 against the Indiana Pacers earlier this evening. The Heat were facing a potential 3-1 deficit at the hands of the walking Tyler Hansbrough’s. In the face of a rabid Indiana crowd (sound familiar?), James led his team to a 101-93 victory to even the series at 2 games a piece. James poured in 40 points to accompany 18 rebounds and 9 assists, just missing on a triple-double. James came up big in the 4th quarter for his team, something that he has taken a lot of criticism for not being able to do in the past. Though he still hasn’t been able to shed the label of not being able to hit the “big shot” with the game on the line, his performance tonight–if only momentarily (or until Skip Bayless takes the air tomorrow) silenced the haters.

– The happy news around UK Athletics was hard to come by this weekend. Two teams were in post-season action while one team was looking to secure a share of the regular season SEC title. Unfortunately, all 3 teams came up short, putting a bit of a damper on the sports weekend. If you came here tonight looking for exciting breaking news from the weekend– unfortunately it just never happened. We didn’t have any Sunday night Julius Mays-like gifts this weekend. Maybe next weekend. The ball’s in your court, Montrezl.

– The UK baseball team watched the SEC title slip through their hands all weekend long. Even after losing the first 2 games and relinquishing the series to Mississippi State, thanks to other results around the SEC, Kentucky still had a chance at a piece of the SEC regular season title with a win in the 3rd game on Saturday. They were unable to seize the opportunity to cap their impressive and rather surprising regular season with the title. Kentucky, who has managed to stay close in nearly every SEC game this season, dropped the 3rd game in a big way to Mississippi State. The Cats fell hard, 11-3, missing on a major opportunity for the program. The Wildcats saw their post-season seeding change drastically, falling to a #4 seed heading into the tournament. With the deep talent pool in the SEC, the road would have likely been difficult regardless of the seed.

– In some much needed positive news for the baseball team following a rather somber weekend, head coach Gary Henderson was named the SEC Coach of the Year. Henderson was beyond deserving after leading his team, predicted to finish 10th in the pre-season in the SEC, to a regular season school-record 41 wins. Henderson’s team spent most of the season ranked in the Top 5 and will try to build on their remarkable season with their opening game of the SEC tournament on Tuesday night against Ole Miss at 10:30 a.m. ET.

– The women’s softball team lost a heart breaker elimination game in the NCAA regional tournament to Louisville. The Cats staged a dramatic late game rally, putting the tying and go-ahead runs on base late in the game, but couldn’t find a way to overtake the 3-2 Cardinal lead. KSR College’s John Burke had a nice wrap-up post on the women’s softball season.

– The men’s tennis team also fell in the Sweet 16 of the NCAA tournament to Stanford. Though the individuals still have a chance to compete, the team’s chance to advance fell short. The implications of the loss will probably take Kentucky out of contention for the Capital One Cup. Kentucky had been sitting in the 2nd place position, within striking distance of North Carolina if the men’s tennis team had managed to reach the Final Four. Regardless of the ending Capital One Cup standings, one thing is for sure– the UK Athletic Department has made a mark nationally across the board in a large variety of sports this season. Chest bump, Mitch.

– The news around the basketball program was very quiet over the weekend. Calipari was spotted watching his son Brad compete in the state AAU competition with his wife this weekend. No official word on whether or not Brad Calipari hit a half-court shot this weekend.

– UK will host their first Sunday Showcase football camp next weekend. Don’t be surprised if a few commitments start to  trickle in following the camps this summer.

– Our fearless, vacationing leader Matt Jones tweeted out a rather intriguing tidbit before leaving us for 10 days. He said, “And keep in mind…Baylor and Notre Dame.” The logical thinking would be that these two teams could be the potential “marquee” opponents that Mitch Barnhart has been bringing up lately. If those are two potential add ons for Kentucky’s schedule next season, the question then becomes whether or not one or both of those games would be a home-and-home series. My guess, and it is merely a guess, is that the Baylor game would be a home-and-home, or a home and neutral. The Notre Dame game seems to be an obvious regional choice for a neutral-site game. It will be interesting to see if the news breaks over the next week or so on either of these possible games for next season. If so, the Baylor game has the potential to get fans excited. Though Baylor is not necessarily on the same level historically as North Carolina or Indiana, the game has some intrigue following a few talent-laden Baylor teams over the past couple of seasons. The Notre Dame game makes me want to take an eleven o’clock nap when I think about it, but it makes sense regionally. Keep an eye out for the schedule to be finalized within the next week or two.

– Some of you all may have picked up on the touching story of a young Nicholasville boy diagnosed with cystic fibrosis who credits UK athletes for his will to live. If you haven’t read the story yet, go check it out. Some of our favorite players are doing incredible things off the court, and this is just another wonderful example.

“It helped lift my spirits,” Reese Kemp said. “It shows what they can do and that they’re not big-headed stars that people think they are, on the court or off. They can be really cool guys you can hang around. They can turn someone’s life around, like they did mine.”

– That’s it for the weekend round up… tune in tomorrow morning as Beisner, Drew and Chip Cosby take over the KSR Radio Show.

Allow me to leave you with this little gem of Shagari Alleyne. He is still lacing up his basketball shoes for the IBA’s Albany Legends. Video Spoiler Alert: #32 gets overly excited… wait for it.