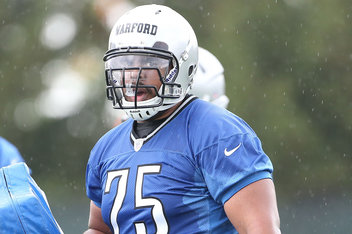 Everyone knew Larry Warford was going to be a solid player in the NFL, but he may be shining even sooner than expected. Warford was drafted in the 3rd round by the Detroit Lions and based on the Lions first preseason game it appears he’s played his way into starting consideration. Warford was a 3-time 2nd Team All-SEC selection at Kentucky and turned some draft experts heads with his performance at the Senior Bowl, against some of the most talented D-Lineman in the class. Add another former Wildcat to the list of players playing significant snaps in the NFL.

The third-round pick played 53 offensive snaps in the 26-17 win over the Jets. That was more plays than any player on either team, and he played all at right guard.

For now, Warford is just happy to be playing in the NFL, wherever it may be.

“I’m just happy to be here,” he said. “I just want one of the spots. If it’s the right guard spot, that’s just a lucky coincidence for me. That’s what I played in college, and I’m pretty good at it. But if I can get any left guard, that would be great, too.”

2 Comments for Larry Warford Competing For Starting Job In Detroit