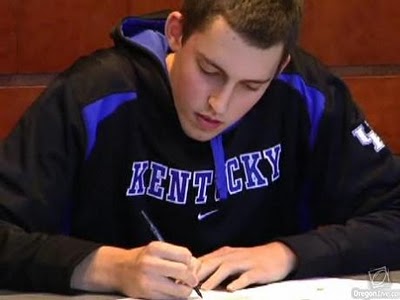 In Part 3 of their 5 part series about the incoming players, the writers at coachcal.com profiled Kyle Wiltjer.  Wiltjer comes in as the least-heralded of his fellow freshman, but that doesn’t mean he doesn’t bring a ton of game with him.  A 5-star player out of Oregon, Wiltjer surprised the UK staff with his committment.  But as more facts about Wiltjer come out, it appears they made have grabbed a steal from the West Coast.  A couple highlights from the article:

As much as you can call an 18-year-old a historian of the game, that’s exactly what Wiltjer is. He’s an astute follower. When Wiltjer discovered YouTube, he ditched the films for highlights and amateur mix tapes. It’s not uncommon for Wiltjer to watch YouTube highlights seven nights a week.

“I feel like I’m a versatile player,” Wiltjer said. “I can go in the post and have a lot of post moves. I can also take bigger defenders out on the wing because I feel like my shot opens up a lot of opportunities. I can change my game against different players. I’m a good passer, so if they throw double teams, I’m good at distributing it. I’m always working on every part of my game because you can’t be perfect at everything. I just try to work on a lot of skill work because it makes me tougher to defend.”

“During my whole career I’ve tried to surround myself with the best players,” said Wiltjer, who chose UK over North Carolina, Wake Forest, California, Texas and Gonzaga. “Even when I picked my high school, no one thought I would even get minutes. I just like to prove people wrong. You get better in games, but you really get good if you’re playing against the best every day in practice because it pushes you being around that high of a level. Going against the best brings out the best in you, plus it’s fun.”

Fan favorite anyone? To read the entire article, click here. Still to come are profiles on Marquis Teague and Ryan Harrow.

22 Comments for Kyle Wiltjer: Basketball Junkie with an Old-School Game