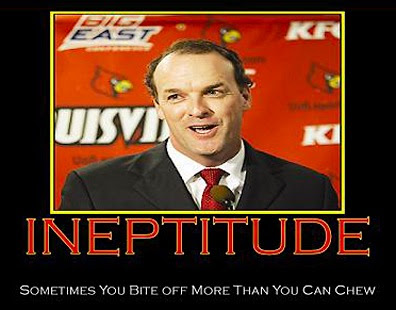 Word began to circulate this afternoon about an internet report from Louisville Sports Buzz that Steve Kragthorpe had been informed that he was not long for the coaching job with the filthy Cards. Of course, having spent the last little while composing some witty prose to properly make fun of the parties involved, Louisville had to spoil my fun before it even got started, as Louisville Senior Associate Athletic Director Kenny Klein told AOL Fanhouse that the reports are completely untrue.

Regardless, it seems Kragthorpe is nearing the end of his run. The Louisville report named Jon Gruden as the coach on top of most Louisville fans’ wishlists, just ahead of Knute Rockne, Herman Boone, Don Shula and Mister Coach Klein. Really? Jon Gruden? I guess that’s why they call them wishlists.