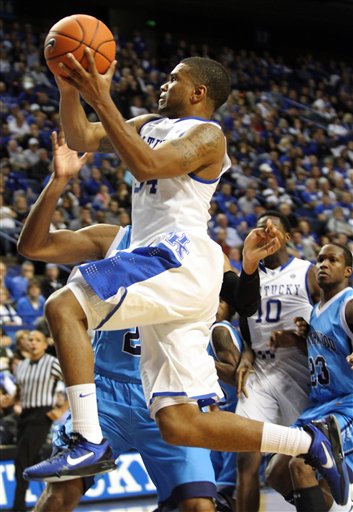 In a game that started out very slowly for Kentucky, the  young Cats finally found somewhat of an offensive rhythm to completely pull away from Transy  74-28. Kentucky buckled down a bit defensively and held Transy to a 10 minute stretch in the second half where they didn’t score a single point. Is it safe to say this is a second half team?  Nerlens Noel led the way with 15 points, pacing 5 Wildcats in double figures. Other than the painfully slow start, the big story line became the status of Julius Mays. Mays, who had a strong game especially from long range, went down late in the game holding his knee. The preliminary reports made it sound like he just strained his right leg. Mays was all smiles on the bench at the end of the game, though he had a bag of ice on his leg.

Calipari didn’t seem discouraged by the rocky start, but knows his team has a long way to go before Friday. “We’re either winning or learning,” said John Calipari in his post-game interview.

50 Comments for Kentucky pulls away from Transy 74-28