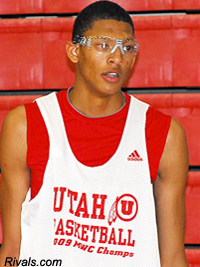 Have you ever heard of a 7-footer being able to golf? I have heard it all now. Isaiah Austin, a 7-foot prospect from Texas, is big into golfing. Matter of fact, he tried out for the Grace Prep Varsity Golf team. Unfortunately, the big fella was cut from the team. “I almost made it but I shot 9 over on 9 holes and I needed to shoot an 8 over.” At least he has another sport…

This comes as good news for Kentucky basketball fans as Isaiah is much more skilled at hoops. Despite being very skinny and having a body similar to Kevin Garnett, the Texas native is ranked nationally at #2 in his class by Rivals.com. Ignore his skinny frame because he can absorb blows and has excellent body control.

Want proof? He’s got the offers to prove it. Austin had a few nice offers going into the June 15th date when college coaches could begin chatting with players from the 2012 class. Isaiah was called so many times he refused to pick up his phone. His voicemail is now clogged and he has offers he doesn’t even know about. “I still need to check my voicemail and figure out who else offered,” said Austin, who is currently at NBPA Top 100 Camp in Virginia. Austin says that he now has offers from “Arizona, Georgetown, Iowa, Baylor, Houston, Oklahoma, Oklahoma State and Kentucky.” Yes, you heard right, Kentucky has offered Isaiah Austin. With more potential offers looming around his voicemail, Isaiah says he will figure things out once he returns from NBA Camp.

Austin chuckled when asked about the possibility of committing to the Wildcats on the spot. “I’m just gonna weigh my options right now but I am very honored that they offered.”  Could the 7-footer be bound for Kentucky? That is yet to be determined. One thing we know is he will not be playing golf for the Cats.