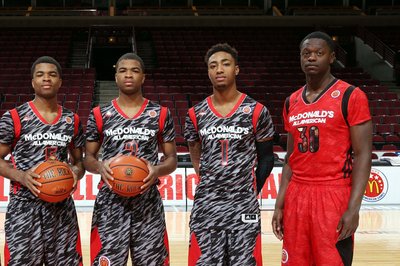 ESPN’s Seth Greenburg ranked the top 10 perimeter teams for next season and while you need to be an insider to see all ten the only team that matters is number one.

John Calipari will once again have an elite backcourt. The combination of freshmen Andrew and Aaron Harrison along with James Young and sophomore Alex Poythress makes the Wildcats’ perimeter exceptional. This season’s Kentucky backcourt will be big, athletic and physically mature.

When you factor in whatever Kyle Wiltjer decides/the possible addition of Dante Exum, reports coming out of practice about Dominique Hawkins’ ability, two veteran reserves in Jarrod Polson & Jon Hood then it’s hard to imagine any team even being close to the Cats. You could almost split those six guys up to take the top two spots on Greenburg’s list.

Seeing as the Cats will also feature the nation’s top frontcourt as well you know it’s going to be a fun year. Who’s going to stop us?