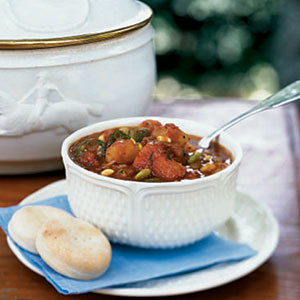 I’ve been reading Heat (A good read so far. It will simultaneously make you want to hone your skills in a kitchen and turn you off to restaurants. Those places are almost sweatshops.) and watching the Food Network when the Reds aren’t playing so I have culinary comestibles on the brain. There are a lot of little tidbits of news scattered throughout the UK landscape today so let’s just toss it all in the pot and see what we develops, shall we?

1) FOOTBALL! UK’s first two home games aren’t going to be in the sweltering daytime heat. Both opening home games are going to be at night which will allow plenty of time for fans to marinate in some Kentucky bourbon and get riled up before kick off. The 9/11 game against Western Kentucky will kick off at 7:30p. A week later, the contest against Akron will begin at 7:00p. Of course, the official opener against the Dirty Cards is on September 4th at 3:30p and will air on ABC.

2) VOLLEYBALL! Exciting news as the UK volleyball team will have 3 games broadcast on live national TV this upcoming season. The match against Tennessee in Knoxville on 9/28 will air on ESPNU at 7:00p. At the end of the season, the Cat’s games against Auburn and Alabama will air on Fox Sports. Last year, the Wildcats were ranked as high as #7 nationally, made it to the Sweet 16 in the NCAA tournament, and got a visit from Matt Jones and the podcast crew. Great news for Coach Skinner and the team.

3) BASKETBALL! You saw the way Patterson played in the summer league right? In case you missed it a few weeks back, here is a video of Patrick snagging a sick pass from a kid rockin’ the glow fro (Chase Budinger from the fake Wildcats) then jamming it home:

4) MORE FOOTBALL! The guys at The Bleacher Report label the UK vs UF match-up as one of their key early season SEC East games. They say we don’t even really have to win, but that just making a good showing will give the fans an appropriate level of faith in Joker. I say we dispense with the moral victories and just thump their sorry little behinds, but that is just me.

5) EVEN MORE FOOTBALL! Great article by Brett Dawson over at the LCJ. I won’t step on Brett’s story, but the quote from Joker about learning that Donte Rumph is academically eligible after 2 years of waiting and working is heartwarming.