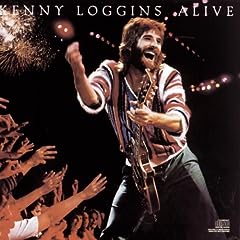 It is virtually without dispute that Caddyshack is the best movie of all time. Some will say it is only the best comedy and maybe I can go with that (Godfather I,II, Bridge over the River Kwai and Mystic River are amazing) but there is no doubt that no movie in history has more quotable lines, great comedic performances and scenes that make me laugh just thinking about them than Caddyshack. (Most underrated scene in the movie….Chevy Chase tells a story to the young kid as if it has a great meaning and looks at him and says, “and you know who that young man was Danny?”….Danny assumes it was Chevy and says, “well you I would guess.” Chevy Chase looks at him as if he is an idiot and says, “No, it was Mitch Kumstein….good guy.” Kills me every time). But what you rarely hear talked about concerning Caddyshack is its score. But today’s birthday honoree Kenny Loggins contributed the theme song for the movie, “I’m Alright” a song that I know nothing about, except that it begins Caddyshack. It is very rare that a song becomes so interlocked with a movie that they cannot be separated in the minds of America’s youth. But Kenny Loggins did that and for this, he surpasses Katie Couric as today’s birthday celebration.

(1) SATURDAY REPURCUSSIONS: Well all that can be said about the blowout on Saturday has been said. Louisville was more talented, Kentucky was not able to adjust to the athleticism and the game was more than a tad bit embarrassing. We now move on to SEC play and hope to forget the Louisville defeat, at least until some drunk UL fan comes over and makes a hillbilly joke while bragging about the final score. But fear not UK fans….they are still Louisville, are still down 26-13 in the overall series and are still going nowhere on the season. What will happen however is that the Cats are about to face a 4 game stretch in the SEC that is more than daunting…..undefeated Vandy at home, Miss St on the road, Florida on the road, Tennessee at home. 0-4 is a distinct possibility, while 2-2 seems like the best to hope for. Beating Vandy is the most important first step. After 4 straight losses to the ‘Dores, we simply HAVE to beat their parading band of tall, white guys shooting threes. This is Vandy for goodness sake and a 5 (or 6) game winning streak is simply unacceptable. For all that is holy and in the name of Barry Goheen, the Dores must go down….and we here at Kentucky Sports Radio will try to help make it happen by….well, by…..well we havent figured that out yet, but we are going to try.

(2) RAMEL AND JOE: Ramel Bradley and Joe Crawford may be the most maligned group of seniors in recent UK history. Both guys have been blasted by the fans, the coaches and the commentators for sins ranging from lack of leadership to selfishness and are constantly on the bullseye for anyone upset about almost anything. And some of the complaints I understand….but I admit that some are baffling. Ramel Bradley had a career high against the Cards and Joe Crawford was the one consistent offensive source throughout the entire game. Yes these guys play a type of basketball that is difficult to be compatible with Billy Clyde’s system. However both young men ARE TRYING. Ramel wants to win as much as anyone I have ever seen at UK and he loves being a Cat as much as anyone to wear the uniform from outside the state. Joe C makes more mistakes and plays a rather individualistic game, but he also attempts to do what the coach says, even if he isnt always successful. I really pull for these two guys during the SEC season….both have gotten somewhat of a raw wrap, but for them to leave UK with a positive image in the fans’ minds, they need a big SEC season….and quick.

(3) PARENTS: It keeps happening. At every UK game in the last 5-6 home contests, the parents of some UK players have been vocal in their criticism of many parts of the team….ranging from the coaching to the play of some of the other players. It is unfathomable to me at times as to how much of the complaining takes place, but it is continuous and has been noticed by many of the media, including at some points online. I dont know the motivation for some of the complaining but it continues to surprise and baffle me. Nothing positive comes from these actions and hopefully they will die down as the year continues to progress.

(4) JACOB TAMME: Lost in a lot of the football talk was the news that Jacob Tamme won the Bobby Bowden award which goes to the student-athlete who combines athletics, academics and his religious faith in a way that epitomizes the Fellowship of Christian Athletes’ principles. This is a national award and Tamme won over all the players in college football. It is an amazing accomplishment and another reward for one of the Bluegrass’s own players and a model athlete for the University of Kentucky.

Finally, in an unrelated note, our new law firm in Louisville is looking for a part-time legal secretary/assistant to begin within the next couple of weeks. We would prefer a young person with an interest in law or related fields who is available about 20 hours a week for secretarial and some substantive duties. We can work around school schedules or other part time jobs. If you are interested (or know someone who is), have them email me at [email protected]