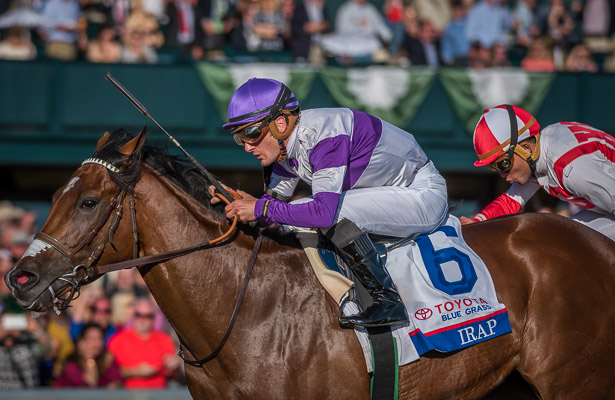 Each Friday during the Keeneland spring meet I will preview some of the most noteworthy races of the weekend, offering handicapping insight and hopefully pointing out a few winners along the way.  Follow me on Twitter @chadlashbrook for more racing thoughts and analysis.

Opening weekend of the Keeneland spring meet produced one staggering result after another, culminating with the biggest shocker of all in the Bluegrass Stakes.  George Krikorian homebred Big Score started the weekend of upsets when he knocked off Breeders’ Cup Juvenile Turf winner Oscar Performance in the grassy Transylvania Stakes on Friday, paying $22.40 to win.  (On a side note, Krikorian owns an upscale string of movie theatres in southern California, Krikorian Premiere Theatres, and has plans to build a downtown entertainment destination in Lexington across from the Hyatt.  If the project receives the necessary approvals, you can bet the finished product will be first class.)

Saturday produced a string of incomprehensible results with Holding Gold paying $38.20 to win the Shakertown, Sailor’s Valentine paying $46.40 in the Ashland, and Irap lighting up the tote board in the Bluegrass to the tune of $64.60.  Those lucky enough to string together successive winners in the multi-race wagers went home with loaded pockets.  The pick 4 and pick 5 wagers ending with the Bluegrass Stakes paid out $19,170 and $64,103 respectively for their fifty cent minimum bet.  That’s a nice return on investment.  Holding Gold was the 2nd longest shot on the board in a field of 9, Sailor’s Valentine was also the 8th choice of 9 runners, and Irap was the 6th choice in a field of 7 which featured 4 horses on the board at odds of 5/1 or less.

This weekend’s action kicks off this afternoon with a 10 race card featuring the 29th running of the Maker’s 46 Mile, a Grade 1 race for older horses going a mile on the grass that was won last year by the top-notch filly, Miss Temple City.  She parlayed that score with another trip to the Keeneland winners’ circle in the fall, again besting the boys in the Grade 1 Shadwell Mile.  Unfortunately she will miss the chance to defend her title due to a mild training setback, but a true Grade 1 caliber field goes post-ward nonetheless.

Race 4 – There is something about the Keeneland turf course that some horses just really seem to appreciate for whatever reason, and sometimes opportunities present themselves when you can identify a horse that has an affinity for a certain track.  Just yesterday, the 3yo filly La Coronel made an absolute mockery of a completely loaded rendition of the Grade 3 Appalachian Stakes over the Keeneland lawn.  In a field that nearly mirrored last fall’s Breeders’ Cup Juvenile Fillies Turf – including impressive winner, New Money Honey – La Coronel, 6th in the Breeders’ Cup, split horses at the eighth pole and bounded home the easiest of winners in the Appalachian.  It should have come as no surprise of course, as she had conquered the Grade 3 Jessamine Stakes here last fall in equally impressive fashion.  La Coronel is a very nice filly regardless of where she is running, but like Miss Temple City she seems to have a special affinity for the grass at Keeneland.  I say all that to make a point with Pour Girl (# 7), a 12-1 outsider in today’s 4th race.  She certainly finds herself in a very tough spot and may well be simply outclassed by rivals Wessex (#3) and Res Ipsa (# 9), who will vie for favoritism.  However, it’s possible that Pour Girl may be one of those horses with a special appreciation for this turf course.  In her only other race over the Keeneland lawn, Pour Girl split horses entering the stretch and proceeded to make up 6 lengths on the leaders to finish 3rd beaten just a neck for all the money in a $50k starter allowance last fall.  She earned an 81 Beyer speed figure that day, easily the best of her career, and a number that actually ranks 2nd amongst this group (behind only the 82 from Wessex last June).  Wessex is lightly raced with a right to improve in her 2nd start of the year and only the 5th of her career, but she will be a short price in here.  Pour Girl may or may not be good enough to win, but she can certainly compete for secondary honors and should offer plenty of value.

Race 9, Makers 46 Mile – Morning line favorite Heart to Heart (# 9) is as honest as the day is long.  A confirmed frontrunner, he has 12 victories and has hit the board in 17 of 27 starts.  Like most need-the-lead types, his best results come when he is unpressured early and allowed to set a moderate pace.  That will most certainly not be the case today.  Grade 1 winner What a View (# 2) has a similar running style, and Calculator (# 7), stretching out here after a downhill sprint at Santa Anita, figures to be up on the pace as well.  Conquest Enforcer (# 5) is also capable of applying early pace pressure.  Many will likely land on Bolo (# 4) as the expected beneficiary of the hot pace up front.  While the son of Temple City has put together a very nice career including victories in the two most recent runnings of the Grade 2 Arcadia (also at a mile on the grass), his form consistently tails off when shipping away from Santa Anita.  Four of his five wins, and all of his stakes victories, have come at Santa Anita and his speed figures fall off dramatically when he ships to run at other tracks.  A case can be made for several longer prices on the board in this one.  American Patriot (# 3) broke his maiden over the Keeneland turf course last spring by coming from dead last, circling the field and making up some 15 lengths in the process.  He went on to run some very decent races against the best 3yo turf horses in the country later in the year and returned with a dead heat victory at Gulfstream in February.  Talented rider Javier Castellano has the mount.  Inspector Lynley (# 8) ships in following a half length score in the Grade 3 Tampa Bay Stakes for trainer Shug McGaughey.  He too kept top company in the 3yo turf division last year and attracts the services of top pilot John Velazquez, who likely had the option to ride American Patriot as well.  Both these 4yos are eligible to improve in their 2nd starts of the year against a very accomplished field of older horses whose best days are likely behind them.

Race 7 – Eagle (# 2) is a deserving favorite in the 87th running of the Grade 3 Ben Ali.  He is a horse for the course, having won all 3 of his prior starts over the Keeneland surface.  On paper, the race seems to set up perfectly for his come from the clouds running style.  Bird Song (# 6), Scuba (# 4), and Conquest Enforcer (# 7, if connections choose to run in this spot over the Makers 46 on Friday) will all contest what is likely to be a tepid early pace, thus setting things up for a certified closer like Eagle.

Race 8 – If all goes well at the break, this race is Lady Aurelia‘s (# 7) to lose.  The daughter of Scat Daddy oozes with class, having conquered the best Europe has to offer in the Group 2 Queen Mary at the Royal Ascot meeting last June followed by the Group 1 Prix Morny at Deauville in August.  Exaggerated (# 4), Pretty Perfection (# 10) and Rapid Rhythm (# 5) appear most capable of taking advantage should the favorite not get away cleanly.

Race 9 – The Grade 3 Stonestreet Lexington Stakes appears to be as wide open as any on the card.  In a race that figures to feature short prices on several lightly raced maiden winners (# 5 Time to Travel, # 2 Souper Tapit, and # 10 West Coast), it may be possible to find some value with the more experienced No Dozing (# 4).  He ran a good fourth after experiencing trouble at the break in the Grade 1 Breeders’ Futurity here in the fall, and he has not been terribly embarrassed competing in stakes company on the Tampa circuit over the winter.

Race 10 – The Grade 1 Jenny Wiley will be the 2017 debut for the ultra-classy Lady Eli (# 1).  The 3 time Grade 1 winner emerged victorious from a severe bout with laminitis late in her 3yo year and returned to take the Grade 1 Flower Bowl followed by a valiant 2nd in the Breeders’ Cup Filly and Mare Turf as a 4yo last year.  She owns a prior victory over the Keeneland green, having scored the Grade 3 Appalachian to kick off her 3yo season, and assuming she is cranked and ready to roll we should all just be honored by the opportunity to watch her perform.  Given the expected pace scenario, Catch a Glimpse (# 3) looks to be the top threat to the classy favorite.  In a race largely devoid of speed, she is nearly certain to set the pace.  She is 2 for 3 over the Keeneland turf and reeled off 5 straight wins to kick off her 3yo campaign in 2016.  She tailed off form in her final two starts of the year but was likely just tired from a long and arduous season.  She returned at Gulfstream Park in early March with a very strong second place finish behind fellow Grade 1 winner Celestine and certainly needed that race from a fitness perspective.  If unpressured early she is clearly capable of wiring this field.  Time and Motion (# 6) defeated Catch a Glimpse and the best of the 3yo filly turf division here last fall when taking the Grade 1 Queen Elizabeth II, and she certainly has the ability to take this contest if Lady Eli is not in peak form.  Illuminant (# 7), Dickinson (# 4), Kitten’s Roar (# 5), and Quidura (# 8) are all capable of springing an upset on their very best days, but only if Lady Eli is off her game.

Best of luck at the races this weekend and Happy Easter!