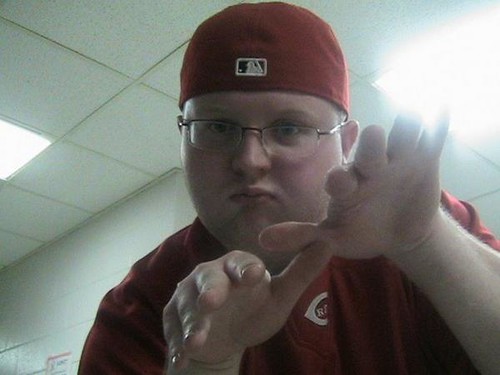 Fresh off a victory over Louisville, the Cats started prepping for the Western Kentucky Fighting Eric the Red’s today.  As is the usual, Joker Phillips met the media and his weekend counterpart, Wille Taggart did the same.  Some notes…….

– Much like their first opponent of the season, the Cats will again face an in-state program looking to rebound under a new coach.  And, much like Louisville, Western Kentucky is also led by a friend of Joker.  This time, it’s former WKU quarterback Willie Taggart, whom Joker called “very sharp”.  For his part, Taggart said of Phillips today that he had him “shooting for the stars” in recruiting.

– The focus, as it always seems to be when you’re playing as a heavy favorite, has been on keeping an agressive mentality.  With the Cats facing a WKU team that hasn’t won a game since September 20, 2008, that seems to be the exact scenario.  As a part of that, Joker said that he will remind his team of the Jacksonville State victory over Ole Miss this past Saturday.

– With Kentucky playing a team that’s essentially a purchased win (knock on wood), this week will again bring the regurgitated “should we keep scheduling non-conference cupcakes?” debate.  When the subject came up at the press conference, Phillips replied to a question about adding a BCS opponent by saying, “No.  Let’s play Western.”

– Joker also gave a little bit of news for all of you out celebrating the National Kickoff Specialist of the Year award when he announced that the battle for kicking duties is still on between Ryan Tydlacka and Joe “Asparagus” Mansour.  He did note, however that it is not due to any mistakes on Tydlacka’s part, though there were a few, but that it was instead because Asparagus is so talented.

– In “Oh no, Eric the Red is going to kill me” news, Taggart said in regards to a question about WKU students wearing UK gear that it would be “totally disrespectful of this university of this university if they’re wearing any blue”.  They say he was smiling, but I assume it was in the “I’m kidding, but I’m not” kind of way.  And, yes, that was a lot of quotation marks in one blurb.