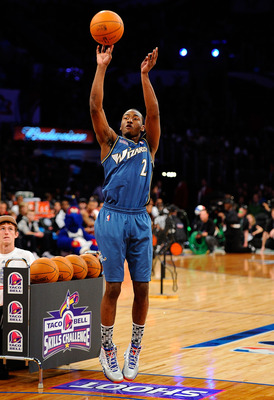 When he wasn’t out celebrating his 21st birthday about four hundred thousand times or hanging out with his supposed new girlfriend (don’t Google her at work), former Kentucky point guard John Wall was working hard on that one little thing he needs to improve to become truly dynamic – his jumpshot.  Everyone who’s seen him play this summer, when he’s been routinely hanging 40+ points on anyone and everyone, has raved about his improved jumper.  You  can now include Sports Illustrated’s Sam Amick in that group.

Amick profiled Wall and talked about how he expects him to break out this season now that he’s healthy, sporting that jumper and a little more mature with the ball.  It’s something that Wall says he’s focused on as well.

“It’s great,” Wall said when asked about the experience factor. “You know how to get certain calls. You know how a team is going to guard you. You know what you really need to work on, and you know what to really expect from different players every night.

“It’s just being smart, trying to talk your team through and be a better leader. Some guys, like Rose and Westbrook and Chris Paul, developed through the years. … I just want to make a big jump.”

Did someone say “big jump”?

7 Comments for John Wall Set To Break Out, Whenever The NBA Decides To Play Again