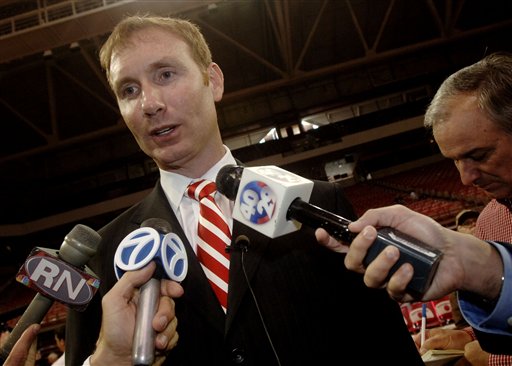 Its been a tough week to be a UK fan. There was the Chris Singleton loss, the Jodie Meeks injury, the continued talk about Gardner-Webb…..its all been a little much. But today I was cheered up a bit when I saw our man John Pelphrey on the sidelines coaching the Hogs down in Puerto Rico. Pelphrey (whose hair now looks a bit like Jim from “The Office”) has a talented bunch of players in his first year and is already putting his stamp on the team. They played College of Charleston (coached by blast from the past, Bobby Cremins) and were pressing most of the game, taking three pointers and moving without the basketball much more than the Stan Heath era teams were known to do. On the sideline, Pelphrey is a bit like the young kid coaching his first youth game and feeling the need to yell on every play. In the nearly empty Puerto Rico gym, you could literally hear nearly all of John’s screams (which occurred every three seconds) and it became comical to listen to his continuous monologue in the background of the announcers’ voices. But equally as clear was his passion and ability on the sidelines. Simply put, Pelphrey is going to have Arkansas very good quickly and will make the SEC an even tougher place than it already has been the past few years. Pelphrey was the perfect hire for Arkansas and I look forward to watching him perform….he just must agree to lose to his alma mater once a year.

(1) Rafeal Little is officially questionable for the game on Saturday against Georgia, but the coaches believe he will likely play and see action. We will however see Tony Dixon, thus giving the Cats more depth at RB.

(2) I talked to someone close to the program today who told me that since the Gardner-Webb game, the practices have been a bit less intense. He said, “Coach seems to have realized that we have to take a step back if we want to have any players left. The practices are still hard, but not suicidal.” I for one see that as good news.

(3) With the Singleton news complete, the question becomes who the next big man on target will be. Three names have popped up in my conversations over the last two days. Aziz N’Diaye, Dwight Miller and Teeng Akol are still getting attention from the staff and it is expected that all three will be getting more focus in the next few weeks. Early next week we will break down all three players and compare them. For now, let me just say that my Akol thoughts are not positive as anyone who heard our Marshall County Hoopfest broadcast from last year can attest. Steve John of Kentucky Sports Report also has said tonight that Matt Simpkins may be getting a look…..West Coast guy, but a player to watch.

(4) Poor Bobby Knight. In an underreported score, Bobby lost to Sam Houston State 56-54this week. They lose a game like this every year…..now that he has left Indiana, I do admit to liking Knight…they play Davy Crockett Upstate next.

(5) I continue to hear that Derrick Jasper’s return is way up in the air. Most hold out hope that he can return mid-January and make a difference….but there is still a worry that permeates the program that he wont return at all this season. That would be awful for the team…..losing Jasper, Meeks and Harris means that UK is without their three best perimeter defenders….that is a problem.

(6) I feel bad about the news that Peanut Whitehead‘s career at louisville is done. Maybe the best defensive recruit they have ever gotten and a spinal injury ends his playing days. Very tough to swallow.

(7) Phil Jackson’s line the other day about his team’s defense, “It was like Brokeback Mountain, too much penetration.” is not the kind of thing you hear a coach say very often…..well except Pat Summitt.

(9) To answer the many emails on the subject, yes I have seen the West Virginia soccer player girl and while she is quite hot, no I wont put her pictures up here. This is a family site after all and the Kentucky Sports Radio girls are enough.

(10) Look for more radio broadcast games this year as the Kentucky Sports Radio crew calls a Darius Miller, DeAndre Liggins and Dakotah Euton game. All three guys play in Lexington this year, and we will be at all events. I cant tell you how good I think Darius Miller will be. He will be the next great player from this state.

One more quick thing. After a delay in production, I just got my copies of the Kentucky Basketball Preview Guide for which Victoria Sun and I compiled the UK section. It includes a preview of UK, UL and high school basketball in the state. We have a preview of EVERY UK player and interviews with all of them compiled before the season. I looked at the magazine and am VERY pleased with how it turned out and recommend purchasing it at the length on the left sidebar. Each purchase you make helps fund this site and keep it free (which we like) but also gives you a GREAT magazine to use through the year. I am honest about what we do that is good here and what isnt so good, but this magazine is top quality and is as good a preview for UK as you will find. We will have excerpts from the magazine these next two weeks to show you what is in it, but I would appreciate all of you that can to order a copy. For those of you that HAVE ordered a copy, I understand they have been sent this week and should arrive early next week.