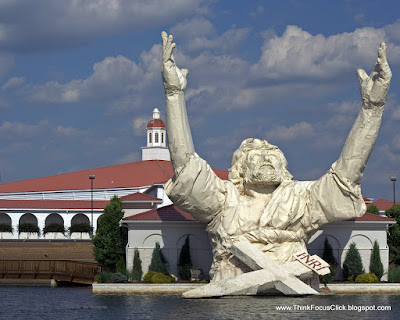 Does anyone else think the Mayans may have had it right, and 2012 could be the end for us all?  I’m starting to wonder after this 6-story statue of Jesus was struck by lightning and burned to the ground last night in Ohio.  So, what does this have to do with the University of Kentucky?

Well, my message is quite clear: IT’S TIME FOR COACH CAL TO WIN US A TITLE.  The way I see it, we only have two seasons left before the end of the world, so it’s time to get this thing going.  And I think it’s fair to argue Brandon Knight should just stay in school since he would only get one season in the NBA and would not benefit from his money.  And hell, let’s just win the last 2 titles, because it’s only right that the best college basketball team in history closes the record books of the Earth with the last 2 titles.  Right?  It’s not worth the risk to not win the title the next 2 years, and then BOOM!, the world ends and freaking Kansas wins the last title.

The tragic fall of the statue also gives me a chance to post this Heywood Banks comedy song.