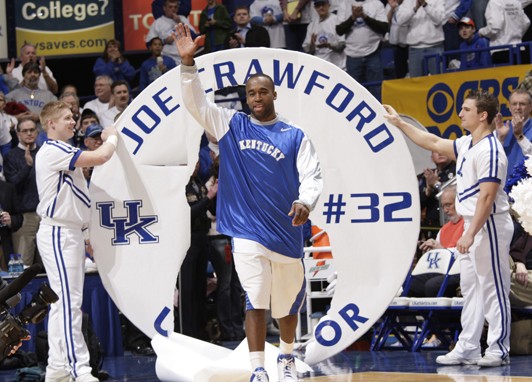 Where in the world is Joe Crawford? I don’t know about you but its something I have often wondered. Joe was a beloved Cat who came in as a part of what was probably Tubby’s best recruiting class. While that class never lead us to the promised land Joe played hard every time he was on the floor and finished his career as a Cat with 1438 points. Joe was drafted by the Lakers but never got a chance to play in the NBA, his career went overseas and it’s been a but since anyone has heard the name of Joe Crawford. Until now.

CoachCal.com’s Fink Densford tracked down the former Kentucky guard to see what he’s been up to. Crawford has been playing all over the world. He’s played all the way from China to Israel where he lead his team in scoring during 2011-2012 season before being hobbled by a knee injury. It was during that time he found his new dream:

A project to raise awareness of the international basketball community that he had grown to love. Crawford said that his time and experiences had inspired him and his family to teach kids about the opportunities that lie outside of the U.S.

Crawford, with the help of his brother Jordan Crawford, who plays for the Boston Celtics, put together the International Hoops Expo. The event will span four days and include both NBA and international players teaching young and old alike about the international basketball community.

“I want to help people prepare, learn about where they’re going and to raise awareness of international sports in general,” Crawford said.

When you’re a kid you grow up wanting to play in the NBA but Crawford want’s to make sure kids know that there are other opportunities to continue your playing career. I think it’s a good message to introduce kids some other avenues they can take to reach their dreams. Crawford stated that he still hopes to play in the NBA one day but if that doesn’t work then spreading the game that has given so much to him will have to do.

7 Comments for Joe Crawford Has A New Dream