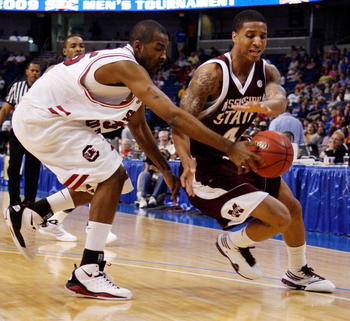 Recruiting sure is a different beast with Calipari.  Long gone are the days of following players like Patrick Patterson and Jai Lucas for entire seasons waiting for them to declare.  Instead we have names that pop up out of nowhere show strong interest in Kentucky right off the bat, and in the case of a few (Wiltjer and seemingly Beckham,) deciding Kentucky is where they want to be.

Twany is a Mississippi State guard looking to transfer, and according to Jeff Goodman, Beckham has decided to play at Kentucky. He wouldn’t be elligible until this time next year, and at this point seems to be getting a prefered walk on spot with a chance at a scholarship if one is available.

Beckham is a Kentucky kid – born in Louisville, played at Ballard –  so it’ll be great to see another one of us living the dream.

UPDATE: And it’s a good old fashioned Source Off!  Matt just got off the phones trying to firm up the Beckham rumors, and according to him, the deal is not yet done.  So take that for what it’s worth.  Beckham to Kentucky… or maybe not.