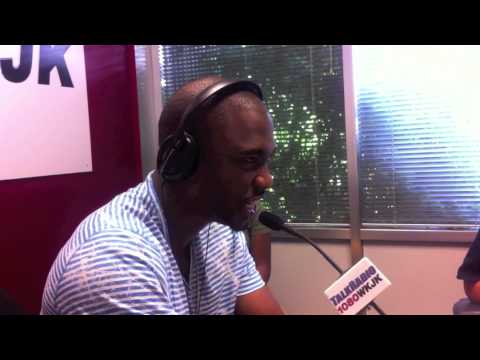 We are in the middle of political season, which means two things. #1 no matter what the issue, the comment section of KSR will turn into a political nerd fight. The latest example came in an email I received this weekend that said (and I am not making this up), “The elitist attitude of Obama voters like you, Drew Franklin and Joker is what is wrong with UK football.” I don’t even know what that sentence means, but I was glad to read it for its overall craziness. And #2, Saturday Night Live will get some of its best material utilized during the political process. And along those lines, we give a big KSR shout out to the man playing Obama, Jay Pharoah.

I will be honest, it is very easy to curry favor with those of us at KSR. Owing in part to the fact that we are generally despised by all of our local media peers (except the ones we like…and some of them don’t like us either), if someone is nice to us, I tend to root for them big time. National media guys like Dick Vitale, Ian Eagle, Gregg Doyel, Bomani Jones and others have been friends of KSR and thus I cheer for their successes at any opportunity. The same holds true for the very few celebrity types we have gotten to know in the KSR time, including Tucker Max, Josh Hopkins and the Sklar Brothers. Be nice to us, and we root for you. That is why it has been great to see Jay Pharoah get his moment in the sun this year. When he came on our show this summer, Pharoah couldn’t have been nicer, not only doing the interview but being nice to all involved and taking an interest in what we do. We saw him perform live in Louisville and have since then, watched him blow up on a national stage. As we head towards November, you will see his face more and more, not just doing Obama but other characters as well (such as his brilliant Michael Strahan this past week). His impressions and comedic timing make him a natural for tv and he is about to take the leap. And just three short months ago, he was hugging it out with Shannon the Dude. That is fairly cool. If you aren’t familiar with Jay, watch his “50 impressions” video below and check him out on SNL. He is the only cast member who has ever uttered the words, “BTI Sucks.”

We could spend some time talking basketball, but beside the Harrison Twins’ father calling out Adam Zagoria’s flowing hair, there is little news. So we need to focus on UK football…

I don’t need to tell you that the game on Saturday was pitiful. There are a myriad of decisions, plays and moments from the game in the Swamp that suggest the end is nigh for Joker Phillips and the current UK football system. But maybe the best way to look at what happened, and the fallout going forward is to visualize it as a tale of four Quarterbacks.

Max Smith: We start with Max Smith, who surprised everyone by not running out on the field on the first series in Gainesville and commanding the team. Smith had been one of the few bright spots on this year’s squad and he came into the game leading the SEC in passing. After a great three and out stop by the UK defense to begin the game, a feeling of optimism may have existed had Smith taken the reigns in a manner similar to his first three games. Instead, we were told that he had a shoulder injury and would not be able to go. The decision was perplexing, as just on Thursday, Joker Phillips told the media that he had “no worries at all” about Smith’s status for Saturday and he would be good to go. But something occurred to change the gameplan and he was told during warmups that he would not see the field. After the game, Smith tweeted (apparently against the “no Tweets after games” rule that was broken by at least ten players on Sunday) that he wanted to play but the coaches said no. It was an odd thing for Smith to send out, but probably necessary after some bloggers (not here) questioned his toughness for not hitting the field. The real shame is that while Kentucky did lose 38-0, the first half could have been competitive if Smith was in the game. Receivers were open and the defense played well…but Max was not in there to lead the team.

Morgan Newton: The player who was in the game was Senior Morgan Newton, who proceeded to put forth one of the worst Quarterback performances I have ever witnessed. I won’t take the time here to blast Morgan for his game anymore, as I am sure he did the best he could. But it was clear that he can no longer play the position at Kentucky. Why that is the case is somewhat less clear, as Morgan looked worse than at any time during his first three years in Lexington. He missed receivers by large margins and looked absolutely out of sorts from the opening moments. After the game, he said that he had very little practice at the QB position the last three weeks, as he had been working at other positions…which makes one wonder, how in the world could UK have gone into its last two SEC games without a QB ready to play the position? If Newton is correct, it is hard to imagine how the coaches didn’t get ready for the possibility of a Smith injury…especially when it occurred before the first play. By the end of Saturday, I legitimately felt sorry for Morgan Newton, especially when he said afterwards that he feels like he is “not as bad as it has looked like.” I know that feeling in life…when a mixture of bad luck and poor performance makes you look way out of your element. It is an awful feeling, and one that Saturday was very painful to watch.

Jalen Whitlow: But as we watched Newton struggle, the question in nearly every fan’s mind was, “why not put in Jalen Whitlow?” After all, he was the third team QB and with the first down and the second ineffective, Whitlow was the next man up. Yet bizarrely, Joker Phillips waited until the 4th quarter to put Whitlow in, almost conceding the game in the process. The set of downs in the third quarter when Newton came in and simply ran up the middle seemed like a quitter’s mentality that was almost shocking to watch. Afterwards Joker said that Whitlow had very few snaps in practice (another peculiar fact) and that he didn’t know as much of the playbook as Newton. Fair enough. But it was clear that Morgan was playing horrendously and the coaches obviously took all of the passing plays out of the playbook in the second half. So what in the world did UK have to lose? Let’s say Whitlow went out there and was awful…at least it would be a Freshman taking his lumps and learning. Newton was bad and is a Senior…what was left to gain by leaving Whitlow on the bench? When Jalen did play, it was hard to gauge much either way, but after the game hints were made that they will prepare to move him into the backup QB role going forward…even if they weren’t prepared to play him on Saturday.

Patrick Towles: Which brings us to Patrick Towles. Everyone’s favorite Kentucky High School All American is likely to get redshirted, a move that on the surface makes a lot of sense. Towles needs a year to learn the system and the dirty little secret amongst everyone who has watched practice is that at this stage, Whitlow has been better. But Towles’s father today suggested that he might not like that one bit. After getting in touch with media members and letting them know he was unhappy/considering a transfer (the tweets/radio mentions on Sunday morning at around the same time surely came from the same source), he did an interview with the Courier Journal’s Kyle Tucker in which he expressed his displeasure with his son’s playing time. He noted that they would discuss at the end of the year what options Patrick had going forward. In response, all I can say is this. It is NEVER a good idea for parents to go to the media with playing time issues. Name me a time it has ever done anything positive. Meddling parents have ruined the careers of a number of UK athletes and Patrick Towles is too talented to have his father interfere with his time here. Patrick showed maturity in tweeting later in the day that the only place he wanted to be was Kentucky, a helpful sign that should have been originally heeded by his father. If the elder Towles is upset at Joker and the staff, I understand…so are many fans. But leaking transfer rumors and then doing newspaper interviews isn’t the way to handle it. Talk to the coaches, Athletic Director or people around the team…but after that, keep it to yourself. Chances are a change is coming regardless at the end of the season.

So that is where we were left after Saturday…a team disoriented, a coaching staff making baffling decisions and a fanbase as upset as I can ever remember. UK football needs a good four months, but it is hard to imagine it being much lower than it is right now. This Saturday’s performance against South Carolina, which will come on national television in primetime on ESPN2, will probably tell us if Joker’s lost the team and if there is any hope for the rest of the season. Until then, most will still speculate about future coaches (which is understandable) and we will try to learn more about the hope for major football facility renovations in the coming months. The sting of Saturday in Gainesville will be hard to overcome however as the ineptness of much of what we saw (highlighted by the screen pass behind the receiver that became a pick six…maybe the worst pass I have ever seen) stick with us. We go at it on radio tomorrow at 10 am…stay tuned.

And oh, if you didn’t get Madness tickets online, remember this. The ONLINE BBM TICKET SALES NEVER WORK RIGHT! If you keep that in mind, you will give yourself much less frustration on a daily basis. That is all.