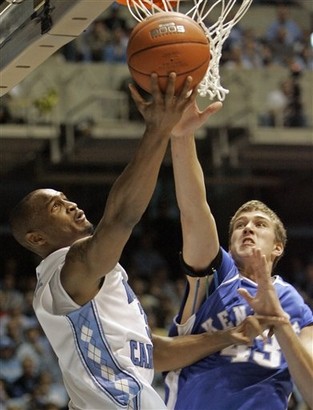 According to Coach Gillispie at the press conference today, Jared Carter has turf toe. Thats right….turf toe. Only Jared Carter would get turf toe…..an injury originally conceived by football players who play on artificial turf. Yes, I know it is possible for basketball players to have the injury, but if I were to have heard that some Kentucky player had an injury that had the word “turf” in it…..Jared would have been my pick. Stuff like this just seems to happen to him. It does look however like he probably will stay….Gillispie said he may play with a traveling team overseas this summer….O Charleys is celebrating.

— According to Coach Gillispie, UK is going to get up and down the floor more next year. Maybe…the players will be more suited to that style, but I am not sure how much of that I believe….Clyde has never been a runner, which in my view is fine.

— I will miss the Member. Folks are always way too hard on people who are at the end of the bench….no team in America has 13 scholarship players, all of which are good enough to play major minutes. Tubby took a flyer on the Member and it looks like it wont work. A big part of that though is that Gillispie doesnt particularly like the traditional post 7 footer….which is why I wonder what will ever happen to Jared Carter.

— I am excited about Kevin Galloway, but folks need to take a step back. One highlight video online has everyone thinking we are looking at the next Derrick Rose. If you had a video of AAU tournaments of Derrick Jasper, you would have seen similar plays. Galloway will be a good contributor and could end up being excellent. But lets not pencil him in as a starter just yet.

I must now go contend with my turf toe….