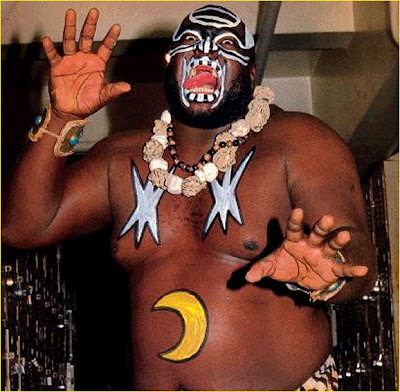 Good morning, my KSR family, and thank you for joining me for the latest edition of your Friday News and Views.  As we enter the painfully slow summer time where the scale of basketball anticipation and actual news starts to find itself painfully unbalanced, your good buddies here at KSR will start to force the “ridiculous” on you in a hot and heavy fashion.  With that in mind, let’s get your holiday weekend started by celebrating the 60th birthday of James Harris, known throughout the world as “Kamala The Ugandan Giant”.  Given wresting’s impeccable history of avoiding stereotypes or misleading its viewers, I was surprised to find out that “The Ugandan Giant” is actual a former plumber and fruit picker from Mississippi with the disappointingly mundane name of James Harris.  Despite his massive size (6’7″, 375 pounds), battles with Hulk Hogan, Andre the Giant, Jake the Snake Roberts and rocking painted stars on his chest that would provide inspiration to roughly half the economy of Tampa, Florida, Harris’ 30-year wrestling career was pretty unremarkable.  But, as we learned again from Ron Artest late on Thursday night, there is life after your prime and Harris came back strong, making the type of music you wouldn’t expect from a Ugandan Giant.  Unless, of course, you expect your Ugandan Giants to write country songs about the deceased founder of the Crips.

Now, onto some UK notes on a pretty slow Friday…

– In what amounted to the biggest news of the day (I told you it was slow), Rivals picked UK’s 2010 class as the best in the nation.  This is the second consecutive year that the Cats have garnered the award and, barring a disaster, probably the pre-cursor to a top class in 2011 too.  While most admit that the individual talent in this class is not at the level of last year’s group, the overall package is a mix of talented players whose skill sets compliment each other quite nicely.  I’ve already said this (and I’ll probably say this 200 more times this summer), but I’m excited about that team that this group is going to form.

– With all of the Chicago combine measurables finally booked and the meat market concluded, ESPN’s Chad Ford released the complete list of where everyone scored in their drills.  John Wall had the second-best vertical (39 inches) and the best time in the agility drill.  And, if you’re wondering why so many teams are interested in Daniel Orton despite his weak stats and new “young Michael Jackson” look, take a look at how his results stacked up against DeMarcus Cousins’.  Not a bad showing for Orton.

– On Thursday, the good doctor, Jerry Tipton, wrote a story titled “Calipari’s squad’s spring grades still the worst of UK teams”, which broke the news that the UK basketball team did not again make the Dean’s List.  But, it wasn’t the news that was posted online everywhere else a few days ago that I found  interesting.  It was that The Herald-Leader requested the individual grades of each basketball player, which the school denied them, citing a federal law designed to protect students’ privacy.  Tipton said that UK provided the individual GPAs for the fall semester and the good doctor was apparently not pleased about the spring GPAs not being made public, as he contacted a non-profit group called The Student Press Law Center for their thoughts (surprise, they said it “didn’t make sense”).  While I find myself among the few who try not to jump all over Tipton for anything and everything, it’s tough to construe this, in my mind, as anything more than diving into the privacy of kids in an effort to grind an ax.  I mean, honestly, what is the point?  Contrary to what Tipton might think, there is nothing about the grades of 12 teenagers that has anything to do with basketball (which is what I believe is his job to cover) or how the program is run.  If the grades are passing (which, collectively, they are), then they’re a non-story.  And, if it’s simply just an attempt to see who of the departing freshmen completed their final semester, there are sources for that.  And pretty much everyone else on the internet had them a few days ago.  Not sure how you could spin this into anything other than digging for dirt at the expense of the privacy of a few kids who happen to be talented on the basketball court.

– In news we all expected, Kadeem Jack decided to head to prep school next season.  Thanks to UK adding Eloy Vargas, Terrence Jones and Enes Kanter, it doesn’t really matter much to the Cats.  But, given the fact that UNC has Tyler Zeller and 120 pounds of John Henson, it sure seems like the Tar Heels have their own little Tyrone Nash moment to dwell on the next 12 months.

– Speaking of North Carolina, we found out that the UNC-UK game will be December 4 in Chapel Hill.  If you plan on making the trip (and their should be plenty of room in the Dean Dome by then after the Heels tank), there are a few things you need to know.  First, the seats recline and are a hazard to your shins.  Second, they stop serving the Bojangles in the media room at halftime.  Third, and most importantly, you need to get to know the other “Jordan” hanging in the rafters.  Jim Jordan, a man who knows where the grass is greener.

– It became official earlier in the week, but new assistant Kenny Payne had a great quote to the media in Oregon when asked why he left for Lexington.  Payne simply said “Kentucky is Kentucky”.  And, in case you’re wondering, Payne is seen as a “rising star” on the recruiting trail, not necessarily an established forced to be reckoned with (which isn’t exactly needed with Coach O and Coach Cal getting things done).  Payne was involved in six recruiting classes at Oregon and those classes netted 0 five-star recruits, 4 four-stars, 13 three-star, 2 two-star and two unraked recruits.  But, the man has connections in the cities where you need them and with the people he needs to have them with.  The best is yet to come, for sure.

– To show you how slow of  a day Thursday was, some of the biggest news was that incoming freshman Brandon Knight cut his hair and will now report to UK without his cornrows.  In a somewhat related note, I thought I had a great idea to say that Enes Kanter must have misunderstood the memo and I was photoshopping him with braids, dreads and other ridiculous hair cuts.  They were terrible.  But, in my mind, it was funny.

– Good news for you recruiting junkies as Kentucky could still add a big body to their roster in the next week  or so.  UTEP transfer Arnett Moultrie is expected to visit Texas and UK after the recruiting dead period ends on June 1.  He would have to sit out a year, obviously, but he’s a legitimate NBA prospect who could be a part of a star-laden 2011 class.

– According to Matt’s tweet, Coach Cal and his wife saw Sex and the City 2 on Thursday.  Not sure if Coach wanted that getting out.  More proof that Matt is bad for UK.

– Congratulations go out to UK’s all-time leading tackler, Dr. Jim Kovach, who was voted into the Academic All-American Hall of Fame.  Kovach, who was honored at halftime of this year’s SEC Championship game, has a bio that reads like a movie script as he’s gone from three-time All-SEC linebacker and NFL player to a running the Buck Institute, only independent research institute focused on age-related illnesses.  Obviously, he earned a medical degree, which I’m sure looks nice to his law degree.  Matt Jones, step your game up.

– In “other sport” news, UK’s Eric Quigley won his second round tennis matchup in the NCAA tournament.  He is now one win away from tying Jesse Witten’s single season school record of 43.  Quigley is the second-greatest South Oldham graduate of all-time.

– In news I wouldn’t know unless it was for Twitter, John Wall was cut from his freshman basketball team.  I can only hope this means he will now inspire millions of children, humiliate someone at his Hall of Fame speech and wear a mustache that would be too small for Bryan The Intern’s face.

– Since I left you hanging on Tuesday, we might as well talk Justified now.  Though a car full of Raylan, his ex-wife and a handcuffed Ava Crowder didn’t net the results I hoped for, this Boyd Crowder cult angle is gaining steam.  I watched the whole episode and pined for the return of Sons of Anarchy only two times.  Progress.  Plus, we can all look forward to the episode where the blatantly stereotypical college athlete punches a man in the face over a hairbrush.

That’s it for now.  Stay tuned throughout the day as we celebrate all things UK basketball with a little extra bounce in our step thanks to Kamala’s country music.  Stick around.  We’ll see you in a few…