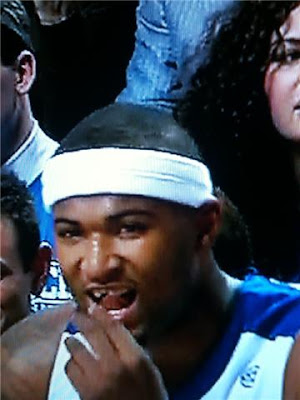 The man they call “Boogie” (and, sadly, not “Carl”) doesn’t get his NBA career rolling until tomorrow, but he’s still making a few headlines today as he gets all ready to go.  This morning, the Sacramento Bee wrote that he missed practice to get his front tooth fixed after an elbow from former Arkansas big man Stephen Hill (or “Lucy“).  But, it’s not just his front tooth that’s getting all fixed up and ready for his first NBA season.  According to this story, Cousins’ leadership has taken a front seat for the Kings and head coach Mario Elie – that heartbreaker – says it’s a welcome addition.  It seems that, although it’s still very early, his new family is seeing what his last one did.

And, as an added bonus on this beautiful Sunday that we’re spending together, take a look at a couple of videos that I dug up just for you, my dear friends, and an article from Kings blog Sactown Royalty that says after seeing one practice last week, it’s safe to say that DeMarcus Cousins isn’t playing around.