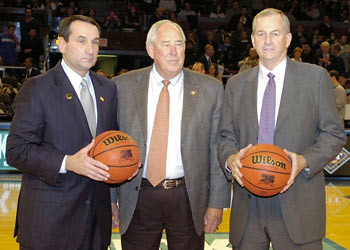 There is a lot of cool stuff floating around the web this week. Here are some of the more interesting tidbits that I stumbled across:

Intriguing Item #1: Could CM Newton be the Godfather of UK basketball? Check out this article from SI regarding all the hoo-ha going on around the UK program, but ignore everything (because it is pretty much the same redundant silliness that lazy sports reporters are belching out in lieu of something worthwhile) except the first two paragraphs. I thought old CM had retired to the Champions Golf Course in Jessamine County to wile away his days smacking around a Titleist and snagging the early bird discount at the Nicholasville Big Boy. Who knew he was still roaming his old haunts and still had the gravitas to reign in the likes of John Calipari with a single word? Georgia can have their coach Vince Dooley. I’ll take Newton on our side any day.

Intriguing Item #2: Could DeMarcus Cousins end up playing with Tayshaun Prince? I’m on record as saying the rumors about Cousins and his attitude are being perpetuated by NBA teams that are trying to get Cousins to fall into their lap in the draft. Not a bad strategy if you consider that the top teams in the draft are pretty much there because of incompetent front offices. They will fall for anything. Either way, Detroit scouts think concerns about Demarcus are ridiculous. I always like watching the Pistons because of Prince, but if they lucked into Cousins as well? Let’s just say the Johns family might be purchasing the NBA package on Dish next year.

Intriguing Item #3: Could Cousins end up playing in California with Kevin Love and forming a Super Twin Tower combo? Probably not as the Warriors might not pursue the sharp-shooting 7-footer if they drafted DeMarcus, but that is one rumor that has been floated. Confession time. I only find this link intriguing because of the DEVASTATING evisceration that Tim Kawakami gives the idiots in Golden State that keep harping on our beloved Boogie. Check it out:

“I keep hearing people refer to the report that some dunderhead Warriors “source” says that the team won’t pick Cousins because he’s just like Benoit Benjamin.
That is one of the most asinine things I’ve ever read, even coming from the group that gave Stephen Jackson a three-year, $28M extension and added Devean George as the last perfect piece to the puzzle last summer. Cousins has question marks, no doubt. But he’s a 19 year old coming off a strong, fierce season at Kentucky (15.1 points, 9.8 rebs, 55.8% FG), going up the best in the nation and usually showing up as the strongest man on the court.
And Benjamin played at Creighton.
Ridiculous comparison. The person who thinks that should be fired.

I mean. Ouch. That is good stuff. And how about the residual shrapnel thrown at Creighton? Creighton is just standing there, minding its own business and WHAMMO! Cinder block to the face. YOU AREN’T AS GOOD AS KENTUCKY, CREIGHTON! NOW GO STAND IN THE CORNER AND THINK ABOUT YOUR PATHETIC EXISTENCE WHILE YOU BLEED. Poor Creighton.

Intriguing Item #4: Does the NBA stink? Naw, but I know a bunch of you loathe the Association. For those of you that feel that way, this link’s for you.