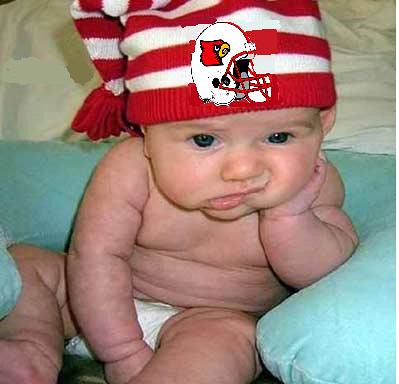 Sorry, kid. You’ve got a difficult row to hoe.

“You Big Bluers. Your team goes 1-10 and you all still flock to Commonwealth and buy UK shirts at Wal-mart.” That is one of the typical snappy put-downs that one of my Louisville friends likes to use from time to time. His lame attempt at besmirching Wildcat Nation is actually much more telling about Louisville and their fan base than it is an insult to UK followers.

Technically, my friend is right. UK fans are dedicated and faithful. . . sometimes to a fault. But rather than considering that a mark of a simpleton mindset, such pride in a program is a badge of honor. A badge that the Cardinal fan base has yet to achieve. For instance, no Louisville fan creates a site dedicated to the history of their program. Their fans don’t travel to other countries to watch the team play exhibition games. Heck, their fans can’t even sell out an opening day football game when tickets are at rock bottom prices, the stadium has been renovated, and a new, widely-respected coach is making his debut appearance.

That state of the Big Red fanbase is pretty pathetic. Rather than cheer for their own team, U of L fans will go out of their way to cheer for “any team playing Kentucky”. They will gorge themselves on Big Blue opponents and revel in their crapulence. It is commonplace to see a Louisville fan in Card gear show up to a bar full of Kentucky fans watching UK play an SEC game and actively root for the other team. It is a sad, pitiable state of affairs when you have more hatred toward a rival team than you have love for your own program.

At the end of the day, the most fitting insult is that they simply don’t matter. They are, in every sense of the word, the little brother that tries to copy our success and keeps failing. The fan base is fickle and annoying and the team only has spurts of relevancy before fading back into the background of college athletics. They represent envy in the worst possible way and they want what UK has: A dedicated fan following hitched to a relevant, successful program. A program that is about to go into their house and throw an epic beat down in their direction. Too bad they don’t care enough to buy tickets to see it.

Also? Their mascot is a stupid bird. . . with teeth. They can get on UK for not using prepositions in their college abbreviation, but at least we have a basic understanding of the animal kingdom. Go Cats.