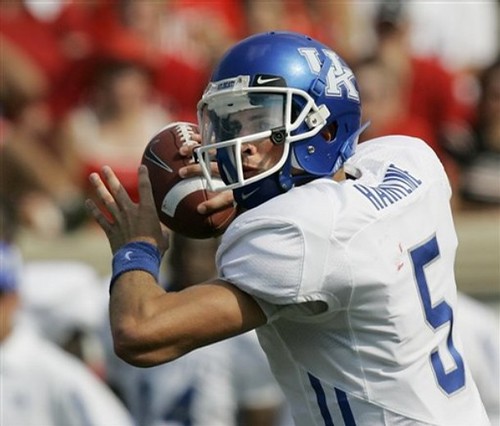 Before we get to the big game, let’s talk a little about Mike Hartline first.

Listen. I know. It can be frustrating. Watching Mr. Hartline drop back to pass and not seeing anybody open and eating the ball. Watching Hartline’s head bob up and look to the sidelines each time the defense moves to see if he should stick with the current play our audible. Watching ball after ball sail out of bounds because there isn’t a play to be made. Honestly, I understand. I get the angst and frustration.

What I ask of you, gentle reader, is that you remember that UK has had a near unprescedented run of great college quarterbacks. Tim Couch, Dusty Bonner, Jared Lorenzen, and Andre Woodsen put up huge numbers. HUGE. They were specimens with stats that literally broke national records. Guys that were in the right place with the right talent around them and the right coaches to maximize their gifts as great passers and field generals. All four went on to make their mark on professional teams (or other college teams, in Bonner’s case) and do UK proud.

Now. Just because Mr. Hartline isn’t on the same level as those four gentlemen is not a reason to throw the baby out with the bathwater. What I think many people are forgetting is that, before and during those great QB years, UK had some QBs that Mike Hartline puts to shame. Let’s take a look at a few:

In Hartline’s year at QB (the one he wasn’t injured) he beats starters in other years in completions, TD’s, and yards. Consider that in 2008 he was also competing with his best WR for his position (52 completions and 542 yards passing for Cobb in 2008) and #5’s numbers look even better, (Honestly, Cobb splitting time at QB and WR had to diminish his effectiveness as a WR and hurt Hartline as a QB). Also consider that O’Ferral and Haskins had Craig Yeast (and Haskins had Quentin McCord) and Boyd had Keenan Burton (I’ll add, again, that none of those great WR’s were also trying to play QB). It is fair to say that had Hartline been around in any of the years above he clearly would have been the starter and UK would have been much better off in each of those seasons.

It just isn’t fair to think that Mike Hartline is one of the worst QB’s ever at UK. He is an athletic kid from an athletic family (his brother Brian started at WR for Ohio State and plays for the Miami Dolphins) that plays the position at an above average level. He doesn’t deserve the downright scorn that some fans are tossing his way as if he were some scrub that isn’t worthy of the jersey. If anything, if today goes the way most of us think it will, he should be praised for doing something that Lorenzen, Woodsen, and Bonner couldn’t accomplish: Go undefeated as a starter against Louisville.