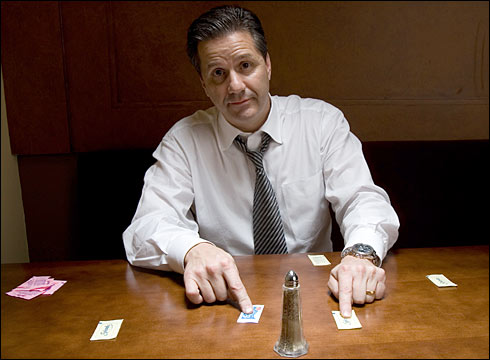 In this week’s Sports Illustrated, S.L. Price pens a lengthy profile of John Calipari, which takes a deep look at the reputation of Kentucky’s coach and why he’s been labeled so negatively nationally by some.  Price paints a different picture of Calipari and takes a number of the issues on head-first by going directly to the sources and quoting a lot of the folks who have been viewed as Calipari detractors.  There are comments from Bruce Pearl, John Chaney, Lou Carnesseca, Billy Packer and William Wesley and the noteworthy quotes are too numerous to list (trust me, I tried).  A certain coach down I-64 plays a heavy role and doesn’t come off looking too great either.  It’s a nine-page piece that refutes many of the myths about Coach Cal and, although it’s a serious piece with loads of information, it did have one particularly amusing nugget:

Twitter is a new and mostly benign toy, but when Calipari began his account at Kentucky in 2009, he wanted to institute Bash Wednesday, a weekly smackdown of adversaries large and small. He was dissuaded, but he still grins over the idea. He likes revenge.

Bash Wednesday?  Revenge?  I like the sound of that.  It’s time to silence the critics.

53 Comments for If you only read one thing today, make it this