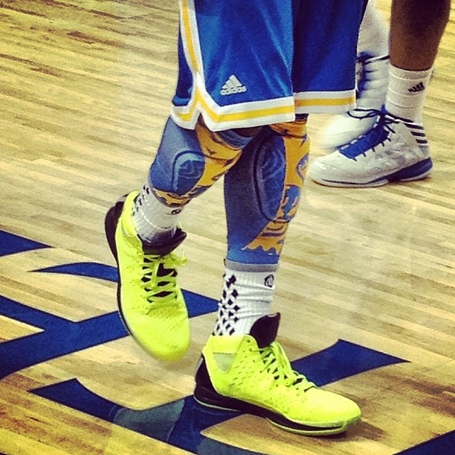 Brought to you by Shabazz Muhammad’s completely unnecessary shin guards.

-Tonight at 7 pm Kentucky faces Morehead State and Sean Woods’ foot in his mouth. Andrew Cassady has a preview for you.

-Need a song to get you hyped? Caroline Hall found a new rap song featuring Anthony Davis in the intro.

–Tara Bilby also stopped by this afternoon with the basketball daily news (written before Calipari’s mysterious tweets about Ryan Harrow came out). Best line? “The most shocking news of the week: Calipari sits down sometimes. Calipari eats chicken. Calipari is a normal human being.” Calipari- he’s just like us!

-In a so-strange-it-actually-worked post, Adam Schilt had a conversation with himself regarding “Just How High is the Ceiling for Kentucky?” this year. He seems very comfortable talking to himself. Just saying.

-Rounding out the basketball portion of these links, JC Ausmus awards her second weekly KSRcollege Jorts Award. Any guesses as to who earns it?

-We still have one more football game left, guys, and as Adam Schilt has found out through his high-tech snooping (read: browsing Craigslist), tickets are as abundant and bountiful as the Thanksgiving feast we will all inhale tomorrow.

-And finally, because no post would be complete without at least one head football coaching speculation, may I present to you Andrew McCarthy and The Case for Kliff Kingsbury.