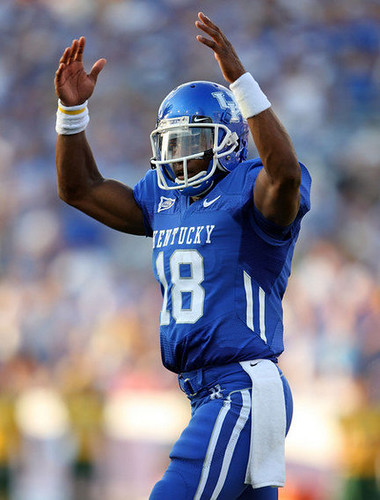 The Legend of Cobb is almost here. . .

I can feel the rumble of college football stir my very soul. Thursday, September 2nd is opening day (JUST 10 DAYS AWAY!) and I can hardly stand it. I love me some Reds baseball, but if I don’t see somebody hit somebody soon (Brandon Phillips aside), I’m going to go nuts. Take a look at some of these links to whet your appetite for some college football (Obviously heavy on the Big Blue flavor):

1) Brett Dawson over at the LCJ keeps up the great work and profiles Jerrell Priester. JP is confident that he can step up and fill the very big hole left by Trevard Lindley and Paul Warford. He has some brash comments that you expect a freshman to make, but you need to have that type of confidence to cover the playmakers in the SEC. Be sure to check the sidebar for Brett’s rundown of the UK DB’s.

2) The main storyline for any Kentucky football article is, of course, who is going to be starting at QB. A variety of outlets, from nationalfootballpost.com to local southern newspapers are wondering about the direction that Joker will eventually take. My money is on Hartline, but the longer this plays out, the less confident Mike Hartline has to be in an assurance of that outcome. Either way, Phillips needs to make a decision soon to minimize distractions and focus the offense around a particular individual. As the clock ticks down toward the battle for The Governor’s Cup, not naming a starter will only hurt the confidence and play making abilities of the eventual starter.

3) If you want to see us how others see us, check out this UK preview from The Tennessean. I’d be lying if I said there was anything in there that was ground-breaking or even really newsworthy, but I needed a way to introduce one of the pictures on another page on that site. Check out the pic of shirtless TSU lineman Charles Sparkman jumping into a pool at a waterpark. Is there anything more terrifying than looking up at something like that headed your way whilst you are mid Marco Polo? I can’t think of something that would instigate a Baby Ruth incident quicker than a big breasted, spread eagled lineman belly flop in my general vicinity.

4) We have done the usual reporting on the signing of Nick Martin. Beisner pointed out that he is the son of former UK player Keith Martin, but his mom also has ties to UK. She was a student trainer for the for the football team (no date was given but it was at least 18 years ago by my math). Also, Martin picked the Wildcats over the following schools: Boston College, Indiana, Michigan State, Minnesota, Northwestern, South Carolina, Stanford, Tennessee, UCLA and Wake Forest. That is what we call a huge get. Anytime we get a guy that Spurrier and Rocky Top want, it makes me happy.