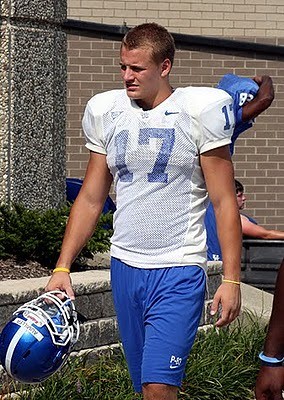 Meet Jordan Aumiller. Louisville is about to get a face full of Boyle County.

No time for pointless preambles so let’s get straight to the football news:

Hut 1: The latest word out of UK is that the team will change its focus for the practice on Thursday. Joker feels like his team is ready from a physical and energy perspective and now needs to shift towards sharpening their mental focus (Maybe with mental floss? Meh). I guess that means the guys will be taking GMAT practice tests or something. Honestly, though, it is Louisville. Those guys couldn’t complete the Wordfind in a Weekly Reader much less get any sharper mentally. Me football player. Me hit hard. That is about the capacity of the average U of L jock. I don’t think UK needs to sweat the mental stuff. Seriously though, Joker wants to play some mini mind-developing games to keep the team sharp mentally. Nice strategy. Fake Gimel is always available with his Travel Risk set should Joker need any help.

Hut 2: Over at ESPN, Chris Low breaks down Joker Phillips‘ approach to the game and his goals for his coaching stint at UK. Joker’s key quote addresses the concerns many of the fans have had regarding the defense and having to replace so many talented players:

Well, not having seen the new makeup of the defense, proclamations about the team speed is very encouraging. While I am sure we will miss the players we lost at cornerback in particular, having a line that pressures the opposing QB helps make up for it.

Hike: Dan Bodner over at The Bleacher Report gives The Big Blue some love and has a slideshow of 5 players to watch against Louisville. Of course, Mike Hartline and The Legend make the top two spots, but the glaring omission is Derrick Locke. Instead, they focus on three other players that are pretty interesting. Martavius Neloms because he is Trevard Lindley’s replacement at cornerback, Luke McDermott because of his surprise starting role, and Jordan Aumiller. I have said before that UK sorely needs a Danville/Boyle (Not Boyd) County grad to step in at Tight End (in the vein of Jacob Tamme and Chase Harp). Mr. Aumiller is up to the task. I’ll make a prediction that Jordan scores 2 TD’s in the game against Louisville and becomes the money TE that this team has been lacking the past few seasons.

Can you feel it? Football is almost here. Go Cats.