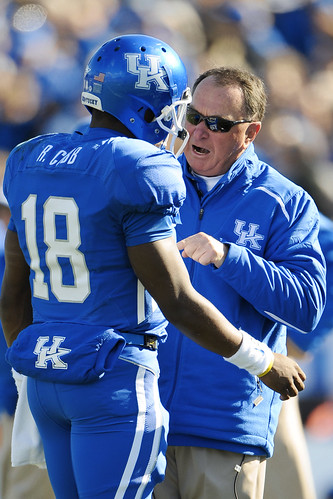 Cobb getting some grandfatherly advice. . .

I warned you. I have my football goggles on and that is all I see. Like those commercials a few years ago where you find football situations in everyday life, KSR is all about the pigskin until the season actually kicks off. Let’s get to some of the gridiron news, shall we?

Hut: Brent Carney over at WLEX has an article about Randy Sanders and his upcoming role as offensive coordinator. For my money, this is the key position change in the off season. Joker replacing Brooks was big, but he had time to plan for it and the transition was expected. Sanders’ ascendancy to OC is full of intrigue. Many credit his guidance of Andre Woodson for the QB’s turn around and it will be interesting to see how he handles the offense as Joker moves on to other HC duties.

Hut: Larry Vaught has an update on the state of the UK team as we barrel toward the showdown for the Governor’s Cup. Vaught reminds us about the friendship between Charlie Strong and Joker Phillips which is nice. I just hope Charlie can remember the good times when he is getting his brains beat in on Saturday.

Hike: Over at FootballScoop.com, they have some interesting quotes from some of the players regarding the UK team this year. Derek Locke talks about the intensity of camp and JP’s motivational tactics, but the money quote comes from our man, Randall Cobb, when discussing the difference in Coach Phillips and Coach Brooks:

“It’s different from Coach Brooks. Coach Joker’s a little bit younger. We can relate to him more. The communication’s better because we feel like he’s more of a big brother to us instead of, like, a … (long pause) like a grandfather.”

Yeah, Joker can pick Drake out of a lineup, but can he produce a savory red Campari tomato that is so juicy it will make you wanna smack your mama? Huh, Mr. Cobb? Didn’t think so. Also? Joker is woefully short of a pocket full of Werther’s Originals. We kid because we love. Go Cats.