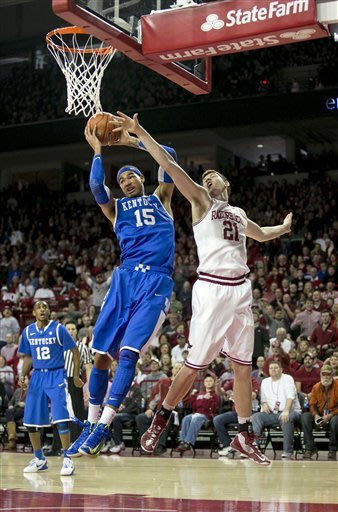 Going into today’s game against Arkansas nobody was going to be surprised if the Cats left with a loss. The Razorbacks were favored by a basket, had only lost a home once this year, and as Cal said following the game you just never know how this team is going to play. However the Cats losing by getting out fought on nearly every possession, being weak with the ball, and getting destroyed in transition is a little bit concerning. Every team in college basketball has taken a tough loss this year and so far the Cats have bounced back but now they face yet another must win game when they square off with Georgia.

Following the loss at Tennessee the Cats looked like they had found their identity in the post-Noel world. The offense was flowing in a way it hadn’t all year and the group of newcomers was beginning to look like a strong team. After today’s loss though the Cats are 3-4 on the road in the SEC  while Georgia just picked up a win over a hot Tennessee team. How are the Cats going to respond in Athens?

Today’s loss in Fayetteville didn’t hurt the Cats too badly in regards to the NCAA tournament as they appeared to be pretty well inside the bubble. A loss though to the Bulldogs and the Cats would have to beat Florida or win the SEC tournament to not be sweating it out on Selection Sunday. Perhaps that is what this team needs to play well. When they have been faced with do or die big games they have played like the team we expected them to be when the year started.  They went down to Ole Miss and exposed the Rebels for the rest of the year. Then they played out of their minds against Missouri as they held off the Tigers in overtime. They answered the call of the must win games. The games though that haven’t been a marquee match-up have been the ones that the Cats show up unfocused and lethargic. Most of which have resulted in another notch in the L column.

So which team is going to show up on Thursday? Will the Cats bring the fight to Georgia or will they drop another game as they show no grit on the road?

45 Comments for How Will The Cats Respond Against Georgia?