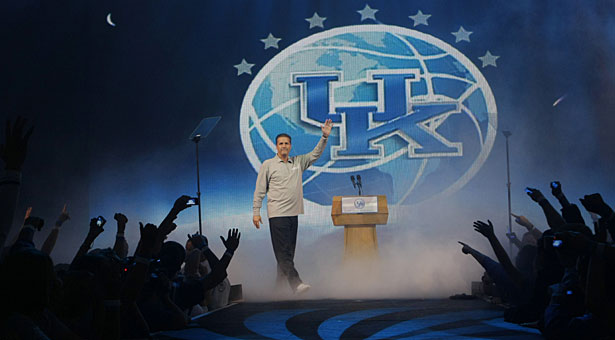 It’s not time to start throwing up your tents with a couple hundred of your closest Wildcat pals, but the RSVPs for Big Blue Madness are already starting to come in.  In the past couple of days, Shabazz Muhammad, Willie Cauley, TJ Warren,  Chris Walker and Dakari Johnson have gone public with their Lexington travel itineraries.  They’ll likely be wowed with the fireworks and the Black Eyed Peas and whatever else UK has to offer, but are the guests at the first practice of the season a good indication of what a recruiting class can bring?  Maybe not.

In the last two years, John Calipari has hosted eight players (Michael Kidd-Gilchrist twice).  Four of them were already committed.  The other four went elsewhere.  Unless you count Kidd-Gilchrist in 2009, which is probably fair, the Cats have not signed a Big Blue Madness visitor.  Here’s the list:

And while the Cats had Irving, Leslie, Harris and Yacoubou in 2009, Washington had Terrence Jones and Kansas had Brandon Knight and Doron Lamb.  So is the list of Big Blue Madness attendees a sure sign of what the next recruiting class might bring?  Maybe not.  But it’s the only place you’ll see them dance.

25 Comments for How Important Is Big Blue Madness?