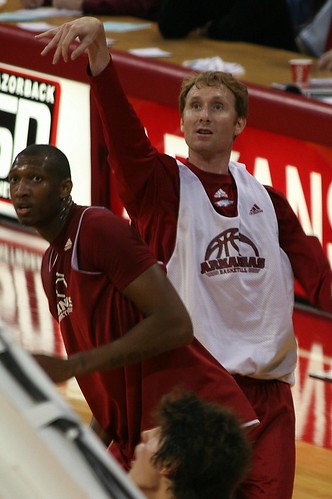 Only four teams have a legitimate shot at the SEC title….Kentucky, Tennessee, Arkansas and Florida (and I am being generous with that last one). Those four have the rest of the league beat in talent (although LSU is in the ballpark) and can get it done through the long haul of the season. Winning a league championship is all about success on the road. Whoever has the most success win, period. But you cant even CONTEND for an SEC title unless you hold serve at home. Lose at home, and you have no chance. So as you watch the SEC race, note road wins (like the one Tennessee got at Georgia), but focus in on home losses.

In that mode, the Hogs made a huge blunder this weekend. They lost badly, at home, to Mississippi State. Championship teams dont do that…..decent teams can slip up at home to mediocre teams in conference. SEC champion teams go 8-0 at home, or if they do lose, it is to the other championship contender. Am I ready to write off Arkansas just yet? Well many would say no and use the “its the first game of the conference season” excuse. Maybe. But history tells us that championship teams dont do what Arkansas just did.

Thus those that put Arkansas into the group of SEC potential winners after the victories over Oklahoma and Texas (which I may have been one) now revise your statements. It is time to take them out.

Three contenders, Kentucky, Tennessee and Florida. Unless LSU steps up, thats the list. Now lets see how it plays out…..