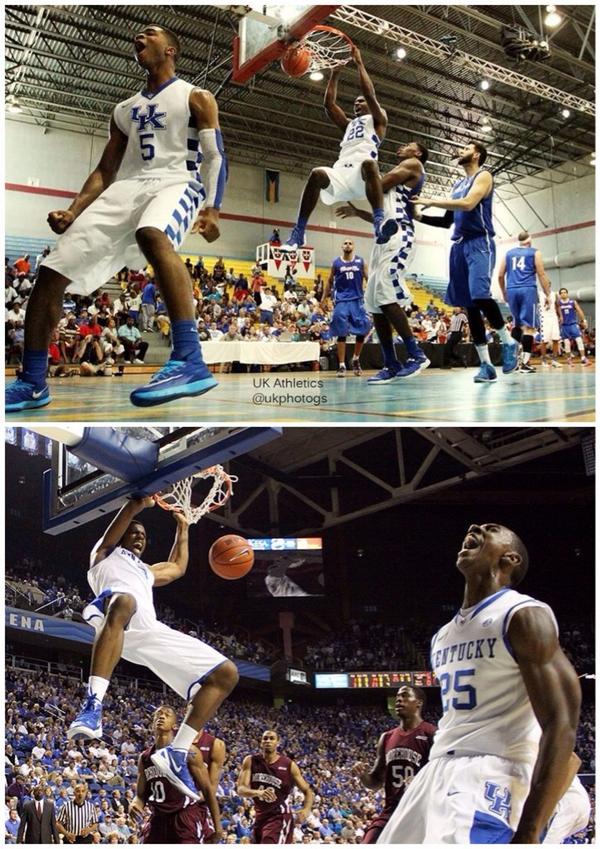 Three games in three days? Christmas has come early in the Bluegrass. Tomorrow history repeats as the Cats look to go 3 and 0 on their Bahamian tour with another win over the Puerto Rican reserve team. Yesterday, the Cats rolled to an easy 25 point win in which they seemingly broke the will of the men from Rich Port. Tomorrow will we see more of the same? Hopefully not everything the same, here are some changes I’ll be looking for in tomorrow’s rematch:

The two platoons have been awesome to watch so far but tomorrow I’d like to see two new lineups take on the Puerto Rican team. We’ve seen how the Harrisons, Poythress, Booker, and Dakari were able to take Manuel De Jesus to the rack so lets see some other combinations tomorrow. How will Ulis’ passing combine with Alex’s incredible athleticism? How about the two man game with Aaron and Karl Towns? How much damage could a potential starting lineup do together?

Game 1 showcased that the Puerto Rican team isn’t able to hang with either of the two lineups and probably not any combination thereof. Let’s see what these boys can do.

You can’t blame the Cats for missing so many threes. Playing in a gym with more three point lines than seats has to be confusing. Still, the boys have shot just 7 of 27 for a 26% average. Does it really matter when you’re scoring from inside the arc at will? No, but it would be nice to see some more of the wide open looks start falling.
It’s only August so outside shooting  will fall with more regularity as the season goes on and the young guns’ nerves wear off. If UK can get their average above the 33% they shot the 3-ball last season then this team is going to blow the doors off most of their challengers.

Today Coach Cal went to work on adding another line to his resume as he went to work filming his team in action. What will we see tomorrow? Cal on the broadcast team? Likely. Cal behind the “concession stand” microwaving popcorn for fans? Possibly. Cal looks to be having a blast with this super collection of talent and that’s one thing I hope continues all season long.

What are you hoping to see during tomorrow’s rematch with the reserve team out of Puerto Rico?