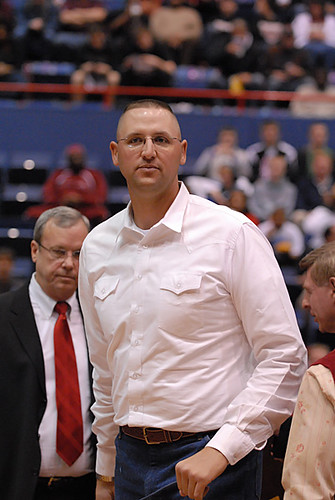 Good morning KSR world and welcome to a quick, abbreviated version of the Wednesday News and Views. As you all still try to forge an emotional comeback after the unparalleled disappointment of a cancelled live blog, let me bring you the good news that former Jazz center Greg Ostertag is pondering an NBA comeback, working out with the Portland TrailBlazers. Ostertag, as I’m sure you barely remember, was the 7’2″, often out of shape center for the Jazz teams that reached the NBA Finals in the late 90s. Obviously encouraged by all of the Stockton-Malone-Sloan-Russell chatter at the Hall of Fame ceremonies over the weekend, the former Kansas big man has asked himself the “Why not me?” question and started putting out feelers. So, just hope he doesn’t end up on your favorite team and that this serves as a comeback green light for Luc Longley, Eric Montross, Jim McIlvaine and Jon Koncak. And, just maybe, this will finally make Ostertag’s old Duncanville High School yearbook I’ve held for years worth some change on eBay.

Now, quickly, on to some UK notes….

(1)  The big news of the day, which broke early this morning, was the unfortunate story regarding freshman linebacker Ridge Wilson and the assault charges he now faces for allegedly punching a female in the face on UK’s campus.  As of tonight, the story is that Wilson turned himself in to police this afternoon and was later released, but will face fourth-degree assault charges from the altercation.  Rich Brooks moved swiftly in suspending him “indefinitely”, obviously rendering the Louisville native out of commission for Saturday’s game.  Wilson, who starred in both basketball and football at Central, was one of just a handful of UK freshmen expected to be of service this year, so this is a blow in terms of football.  But, should the allegations turn out to be true, this becomes an issue much bigger than a depth chart and Wilson’s time with the Cats could have started and ended with the Miami game.  You’ll often hear fans – no matter the sport, school or team – argue for forgiveness and a second chance when players fun afoul of the law.  But, when the act in question is one of violence against women, you’ll be very hard pressed to find much support…..especially given some recent events in the state of Kentucky.  Not the kind of story you want to hear about your alma mater.

(2)  On a much happier note, FB John Conner looks to be available to play against Louisville after battling an ankle injury for a few weeks now.  Wideout Kyrus Lanxter will most likely not be available, with Gene McCaskill and his impressive hair moving into his spot as the third wideout.

(3)  As Matt tweeted out earlier, there seems to be an interesting situation developing with football commitment Tim McAdoo, who pledged a “soft verbal” to the Cats about a month ago.  It appears that after some statements made to Rivals, McAdoo’s commitment is softer than a newborn’s skull.  The three-star defensive tackle from Tennessee said that while he still likes UK, he’d accept an offer from Florida State, LSU, Tennessee or….UAB?  Losing a commitment to the three big schools wouldn’t necessarily be mind-blowing, but letting one slip to a Conference USA team that went 4-8 last year would make you wonder.  Obviously, a situation to keep an eye on.

(4)  Over on the basketball front, the recruiting madness continues as the staff was scheduled to have an in-home visit with Josh Selby Tuesday night.  Selby, as you might remember, de-committed from the Vols earlier this summer and has already hosted Baylor, Oregon, Kansas, UConn and Florida State.  He told the Baltimore Sun that no team has really stood out from the others yet (this prior to UK’s visit), and UConn turned up the creativity by stopping in Wednesday morning just a minute after midnight, the first time coaches were allowed to visit.  Selby is a part of a trio of top point guard prospects (Brandon Knight and Kyrie Irving are the others) targeted by the Cats this recruiting season.

(5)  Speaking of Irving, Adam Zagoria reported today that Rod Strickland’s godson would be visiting the Cats in mid-October.  Irving, who the staff has already made an in-home visit with, has visits set to Duke (Sept. 25), Indiana (Oct. 2) and Texas A&M (Oct. 9).  Zagoria also noted that he will take a fifth official visit to either Seton Hall, UConn or Georgia Tech.

(6)  Also, one of the rumored early commitments from several weeks ago, Adreian Payne, will be visiting Kansas on October 24, according to the Kansas site The Shiver.  Payne will be making an official visit to Lexington the weekend of September 25, so hopefully he won’t even make it to Lawerence.

(7)  Another story that made it’s rounds today was the news that UK had self-reported two other secondary violations to the NCAA earlier this summer, in addition to the Bilal Batley rebounding incident revealed earlier this week.  Neither one is really of any consequence or involves the current staff, but the good doctor Jerry Tipton reports tonight that Lee Todd is confident that John Calipari operates under NCAA rules.  Todd says that in addition to having a strong compliance staff, he knows that Cal feels he’s being unfairly blamed for things he hasn’t done and he has no doubt that he does not want to be in that type of situation again, saying “We don’t want gray areas”.  Hopefully, we’ll never have to hear about this again once basketball season starts.

Well, that’s it for now.  Stay tuned throughout the day as we bring all the UK football and basketball news to you in the most ridiculous manner possible and try to turn up the fire on a seemingly very quiet rivalry week.  See you in a few…