The Kentucky basketball team is deep in the middle of conference play, but for the past couple of weeks football recruiting has been the hot topic on the minds of the Big Blue Nation. 3 months ago I couldn’t have imagined myself being so absorbed in football recruiting that I spent nearly 7 hours of my Wednesday repeatedly refreshing Twitter and waiting on updates to come from a fax machine. But I love it. Mark Stoops in in less than 100 days has completely reversed the momentum of Kentucky football, and in the process made Lexington a viable destination for some of the top prospects in America. This weekend, the Kentucky football staff will be hosting their annual Junior Day, and have capitalized on their positive momentum by bringing in a bevy of highly rated prospects in to get their first looks at what Kentucky has to offer. Here’s a look at some of the most high-profile recruits that will be in Wildcat country over the next couple of days.

Get used to seeing the name Godby around quite a bit, because it will be a main target of Coach Stoops and Co. in the 2014 class. Singleton will be visiting this weekend with Godby teammates LB Jake Pugh III and CB De’Eric Culver. Singleton is on Rivals’ 2014 Top 250 Watch List and holds scholarship offers from Kentucky, Louisville, Arkansas, Miami (FL), Ole Miss, South Carolina, and Tennessee among others. Singleton was offered last summer by Joker Phillips but was not viewed as a probable option until Mark Stoops arrived in Lexington. Stoops was in charge of recruiting Godby High School while he was at Florida State, which is the main reason that the big trio of teammates will be checking out campus this weekend. Justin Rowland of Rivals.com says that Singleton’s recruitment may eventually come down to Kentucky and Georgia.

Pugh is another recruit that Stoops will look to pluck out of Godby High, and seems to have gotten off to a great start. Pugh has shown the Big Blue Nation a lot of love on Twitter recently, posting a tweet a few days ago stating that of all the schools he has researched, that Kentucky has stood out the most. Yesterday, Pugh also noted he’s be visiting the campus store to pick up some Kentucky gear this weekend so that he could show it off back home in Florida. Pugh has offers from Mississippi, Mississippi State, South Carolina, and Vanderbilt, and has also received interest from Alabama, Florida, and Florida State. With a list of suitors like that it may be hard to believe, but as of right now Kentucky appears to have the early lead in his recruitment.

Been doing research on universities all morning and the only one that really stood out was University of Kentucky !!! #Wildcats #Stoops #SEC

Culver is the 3rd of the Godby teammates here, but he is no slouch. While most of the major recruiting sites haven’t evaluated much past the top-level talent in the 2014 class, many believe that Culver will be in contention for a 4-star rating once the final rankings emerge. Culver is being recruited by Kentucky, Louisville, and Tennessee, and also holds offers from Mississippi and Mississippi State. Needless to say, this trio of teammates will be huge targets for Stoops and staff in his first full recruiting year. 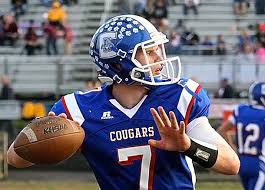 When you think of Neal Brown’s “Come Be A Hero” campaign, Barker is a player that he probably had in mind. Barker is the top-ranked player in the state of Kentucky and the coaching staff’s #1 target at the QB position for next year’s recruiting class. Stoops and Co. have already been to see Barker throw a couple of times and had him on campus for an unofficial visit in the last month but it will take a great effort by the coaching staff to fight off all the top programs hoping to pull him out of Kentucky. Barker currently holds offers from Kentucky, Louisville, South Carolina, Tennessee, Illinois, Cincinnati, and Vanderbilt among other smaller schools but Neal Brown has made it perfectly clear to Barker that he is one of main, if not the biggest, priorities for the staff in this recruiting class.

Another top in-state recruit for the Wildcats, Fant is a rising player in the 2014 class. Fant is another player in the mold of Jeff Badet and Ryan Timmons, a shorter, shifty receiver with 4.5 speed and is starting to get looks from some of the best teams in the country. Fant doesn’t hold a Kentucky offer currently but does have a scholarship offer from Illinois and has also taken unofficial visits to Vanderbilt and Ohio State. 247 ranks Fant as the 3rd best junior prospect in the state of Kentucky so Coach Stoops will give one of the top in-state products a look this weekend.

UK fans have become well-versed in Lawson’s recruitment over the past week as the “will he or won’t he” saga of his visit this weekend went back and forth, with Lawson and his mother ultimately deciding to catch the flight up to Lexington after all. One of the final pieces of the 2013 class, Lawson was asked to greyshirt after committing to LSU and has decided to explore other options, with another visit planned for Louisiana tech next weekend after his trip to Lexington this weekend. Lawson would be another huge get for Kentucky, as UK graduates 2 returning starters after the 2013 season at DT in Mister Cobble and Donte Rumph. Lawson would provide some talented depth for the future at the position and Stoops and Co. will try to close the deal this weekend.

One of the more promising future prospects for the Kentucky program this year, Horton is a high school teammate of 2013 OL signee Kyle Meadows and visited unofficially with Meadows on January 11th. As of right now Kentucky has the lead in his recruitment, based off his visit and the fact that Horton has said that he would love to play with Meadows in college. He has flown under the radar for the most part, only picking up offers from Kentucky, Indiana, Kent State, and Toledo so far, but he was named to the Rivals 250 Watch List for 2014 and teams such as Alabama, Florida State, Ohio State, Notre Dame, Michigan, and Michigan State have begun to show interest in the 4-Star RB. Hopefully Horton was one of those players that Coach Vince Marrow mentioned were close to committing from the 2014 class and that the ‘Cats can hold off late charges from some of the top programs in the country.

**Note: Some of the recruiting rankings haven’t evaluated all of these players yet, so I had to jump back and forth between Rivals and 247 depending on which had any information on a prospect

**Another Note: Completely unrelated, but I’ve noticed that there seems to be some confusion regarding one of our current players’ names. But #14 on UK’s football team is in fact Patrick Towles, and not Patrick Towels. Towles — Laser-armed QB. Towels — Bathroom object used for drying things. Hope that helps, and remember:

20 Comments for Get Used To This, Another Big Recruiting Weekend For UK Football