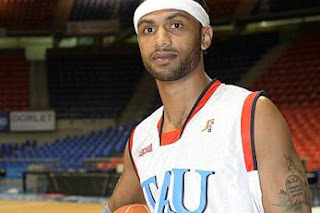 Former Kentucky star Gerald Fitch, my favorite player along with Erik Daniels, is setting the nets on fire over in Spain.  The SEC Hoops Twitter account sent out a blurb today that Fitch was named MVP of Round 4 of the ACB in Spain, which is the country’s premier league.  According to the press release, Fitch is now “a new hero to worship” after he “amassed a stunning valuation of 44 after harvesting 41 points on the road to victory”, again proving that there is no subsitute for the flair of foreign journalism.  Here is the whole excerpt from Eurobasket.com:

Sharp shooter Gerald Fitch (191-G-82, agency: SportsTalent, college: Kentucky) Has been named as the MVP for Round 4 of the ACB after continuing his white hot form and blistering start to the season. Since moving from the TBL in Turkey to Ayude en accion Fuenlabrada he has lit up the league with some devastating performances and none more so than his display over the weekend against Meridiano Alicante.

In one of the best performances in the ACB of the past few years, let alone of Round 4, Fitch amassed a stunning valuation of 44 after harvesting 41 points on the road to victory as he fired his team to the summit of the classifications.

He made a quick start and at one stage had buried a flawless five of five triples, eventually ending up with seven of nine from outside. He also added 6 rebounds and 4 assists to his haul while also breaking the scoring record of Fuenla by reaching the 41 point mark.

A sensational performance and the pick up of the season so far for the Oranges who despite having lost all of their star names in the summer as well as the legendary Ferran Lopez through retirement have found a new hero to worship at the Polideportivo Fernando Martin.

So, congrats to Gerald Fitch.  May we all worship him as a hero for his bountiful point harvesting.